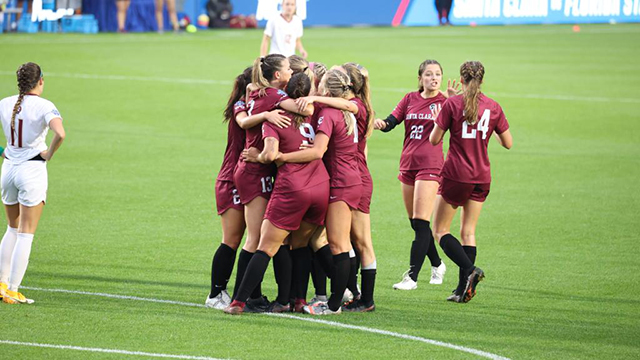 For the first time in two decades, the Santa Clara are national champions.

The Broncos’ NCAA tournament run culminated with a 4-1 penalty kick shootout victory over Florida State in the title game, winning the first championship since 2001.

The two sides were deadlocked at 1-1 after 110 minutes, with goals coming in the second half from Jenna Nighswonger and Kelsey Turnbow – a tough and defensive contest typical of title games.

"The game was a tough game. [Florida State] plays like a pro team. We conceded possession in their half of the field and limited their chances. That was certainly part of our game plan," Broncos head coach Jerry Smith said after the game.  "When you have lethal attacking players like we have … we don't need a lot of chances to score goals. Thankfully, Kelsey put one in for us. I'm really proud of our group for sticking to the game plan for sure."

It came as something as a surprise at kickoff as Florida State rolled out a different formation, with an eye to neutralize the Santa Clara attack. The Seminoles two center backs man-marked D’Aquila and Kelsey Turnbow, while also deploying a sweeper.

Unexpected wrinkle aside, the game’s first half featured limited chances. Florida State enjoyed the bulk of the possession, circulating the ball and probing at the Santa Clara defense. Turnbow did get a good look the 31st minute. Ghosting past the sliding challenge of Lauren Flynn, Turnbow dribbled into the box. Forced out wide by center back Emily Madril, she got an effort on frame that Cristina Roque did well to palm out for a corner kick.

Set pieces were often when the Seminoles looked the most dangerous, particularly in the first half. In the 38th minute, FSU won a dangerous free kick just outside the box. Jenna Nighswonger couldn’t beat the Santa Clara wall, however, and the chance went begging.

In the 63rd minute, Florida State got the breakthrough. Midfielder Yujie Zhao collected the ball at the top of the box with her back to the Santa Clara goal. She quickly shuffled possession into the path of Nighswonger, in space at the top of the box. Given just enough time and space by the Santa Clara defense, Nighswonger curled a lovely effort past goalkeeper Marlee Nicolos and off the far post.

A beautiful game of inches 😍

Jenna Nighswonger shoots a rocket that bends just inside the post!#CollegeCup pic.twitter.com/yT0OMJAxp8

Conceding a goal shook the Santa Clara attack to life, and the Broncos pressed higher up the pitch, seeking the equalizer. Florida State’s stout defense yielded little however, as D’Aquila, Turnbow and Julie Doyle sought to create something.

It took a defensive error to produce the equalizer. In the 84th minute, Kirsten Pavlisko tried to play a back pass towards Madril. She overhit it, easily within reach of Turnbow, who had just Madril and Roque to contend with. The senior star cut back onto her left foot, slotting it into the corner of the goal to send the game into overtime.

The Seminoles had a flurry of set piece chances towards the end of the first overtime, but the Bronco back line held on. Chances continued for the Seminoles, as Zhao hit the crossbar with a left-footed shot with just a minute left as well.

After neither side could score, the game went to penalties – the third straight game for Florida State in this tournament, and the second time for Santa Clara. This time, the third time wasn’t the charm for the Seminoles, and when D’Aquila’s spot kick beat Roque, pandemonium for the WCC side ensued.