Seminoles #1; Johnston Player of the Week 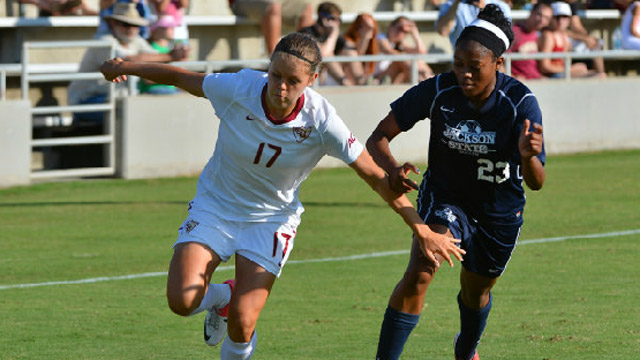 A relatively light week of action in women’s college soccer saw a number of highly-ranked program facing just one opponent this week, and this helped many avoid dropping in the rankings, with Florida State, Stanford and Texas A&M staying in the top 3 of our TopDrawerSoccer.com Tournament 64 National Ranking, updated today. Penn State moves up to #5 following a pair of wins, with Notre Dame and Georgetown also making good moves up the ranking this week. 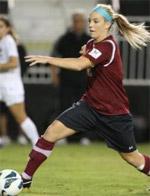 Meanwhile, Julie Johnston of Santa Clara is our Women’s College Soccer Player of the Week after she led her team to a pair of shutout wins from her holding midfielder role. Johnston provided her usual commanding presence in the center of the park and added a pair of goals as Santa Clara defeated Cal State Northridge(w) (behind her golden goal) and Washington State. The honor, along with the 11-player Team of the Week, is awarded each week after a review of match reports through DI Women’s Soccer.

M: Kristen Hamilton, Denver – Scored a hat trick to lead Denver to a 3-1 victory over Portland, one of 2 wins for the  Pioneers on the week.

M: Julie Johnston, Santa Clara – Scored twice, including a golden goal vs. Cal State Northridge(w) to help the Broncos to a pair of shutout wins.

M: Kylie Davis, Memphis – Scored 2 goals, including an overtime winner against UCF, as the Tigers won a pair of matches.

F: Stephanie McCaffrey, Boston College – Scored twice in the final 6 minutes to lead the Eagles to a 2-1 win over Virginia Tech.

F: Jen Hoy, Princeton – Scored a hat trick vs. Lafayette as part of a 2-win week for the Tigers.

F: Laura Moklestad, Drake – Scored twice and added 2 assists in a pair of wins as the Bulldogs extended their school-record win streak to 8 matches.

F: Frances Silva, West Virginia – Scored 3 times to help the Mountaineers to a pair of victories.