The women’s college season is nearing the midway point, and we’re taking a look at a handful of currently-unranked teams who are in an interesting position with regard to how their respective seasons might shape up.

None of the seven are currently in our TopDrawerSoccer.com Tournament 64 National Ranking, which is a projection of the postseason NCAA Tournament field, including automatic conference qualifiers.

These seven are listed alphabetically.

Alabama – Todd Bramble’s Crimson started SEC play with a draw and a loss, but are 5-2-1 overall. Katie Bourgeois leads the team with 6 goals, while Pia Rijsdijk and Theresa Diederich have each scored 4. Shelby Church has been strong in goal, with a 0.777 goals against average.

Colorado –First-year coach Danny Sanchez has really hit the ground running in Boulder. The former Wyoming head man has won everywhere, and the 6-1-2 in non-conference play by the Buffaloes 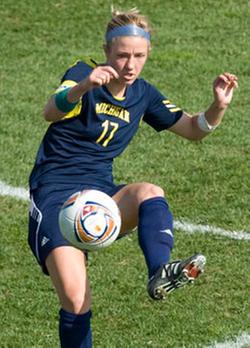 Granted the schedule thus far hasn’t been the strongest, and the lone loss, a 4-1 setback to instate rivals Denver will be a tough pill to swallow for the bigger school, but you don’t win 6 of 9 matches by smoke and mirrors. Goalkeeper Annie Brunner and her defense have posted shutouts, and junior forward Anne Stuller leads the team with 7 goals.

Colorado College – At 5-1-3, Geoff Bennett’s Tigers clearly will be a force to be reckoned with in Conference USA. The team has done it with defense, holding opponents to just 7 goals in 9 matches. Starters in the back include Kecia Morway, Sierra Keeler, Kelly Browne and Sarah Haizlip, with freshman Kate Scheele seeing most of the action in goal.

The team opens C-USA play this weekend at Marshall and East Carolina.

Texas Tech – The Red Raiders are 7-2-0, with the only losses coming on the road to SEC teams Mississippi and Auburn.

Michigan – Greg Ryan’s Wolverines are 7-2-0 and have won three matches in a row, including last weekend’s Big Ten opener against Indiana, 3-0. Canadian youth internationals Nkem Ezurike and Shelina Zadorsky have been re-integrated into the starting lineup, with other standouts like Meghan Toohey, Tori McCombs, Holly Hein, Corinne Harris, Kayla Mannino and goalkeeper Haley Kopmeyer also helping to lead the way in Ann Arbor.

The Wolves face a tough road trip this weekend, at Minnesota and Wisconsin.

Missouri – Bryan Blitz’s Tigers are 7-1-0, giving up just 5 goals on the season. Goalkeeper McKenzie Sauerwein has been excellent between the sticks and behind a standout defense that includes Allison Hu, Candace Johnson, Danielle Nottingham and       Lauren Flynn.

The Tigers posted shutout wins over Auburn and South Carolina this weekend to start SEC play in style. This weekend they host Mississippi and Vanderbilt.

Washington State – Keidane McAlpine’s Cougars have averaged 3 goals per game en route to a 6-1-0 record. Micaela Castain has scored 8 goals while Brandi Vega has 4 for the first-year coach. Sophomore Jocelyn Jeffers is also a potent force in the attack.

This weekend will bring Washington State’s stiffest test of all, as the squad travels to California where it will face UCLA and Santa Clara.