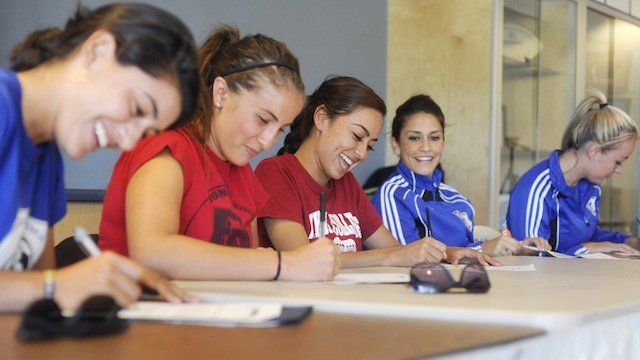 Signing Day is here. Generally the most hectic day in most college sports’ offseason calendar, soccer signing day is generally a bit more placid. Whether players are hopping to the pro ranks or programs are wrapping up top recruiting classes, much of the action won’t be cemented until several months down the road.

But that doesn’t mean there isn’t plenty to watch out for this year. Here’s a breakdown of some pertinent storylines to monitor as the pen hits paper and commitments roll in throughout the day.

Signing Day for college soccer generally marches to its own drummer, but it does share some notable similarities with other sports. Perhaps the biggest is the simple gravitational pull generated by the nation's top programs. The best programs - places like North Carolina, Stanford, UCLA - tend to reel in the best recruits. There's little surprise in those words.

But neither of the top-ranked recruits in the 2015 class chose tranditional powers. On the boys side, four of the top five players in this class already signed professional contracts, and the fifth, Shaq Moore, is likely to do so after a strong showing for the U.S. at the CONCACAF U20 Championships. The highest-ranked recruit left on the board is No. 6 Amirgy Pineda, who played club ball for Fullerton Rangers. He stayed home to commit to Cal State Fullerton, a coup for a talented mid-major program.

Meanwhile, on the girls side, 2014 Gatorade High School Player of the Year Katherine Cousins is headed to up-and-coming Tennessee. The Lady Vols are loading up on talent, but they're hardly a traditional top dog in the SEC. That title belongs more to the likes of Florida or Texas A&M. Along with a glut of talent already on the roster and a top notch 2015 class, Cousins' commitment could help move the needle after a recruiting cycle that was good to the underdogs.

Watch out for transfer shockers

Signing Day is rightly best known for the parade of incoming freshmen that make official signings they’ve largely held in hand for months. While programs like Maryland and Michigan State attempt to hang on top top-ranked recruiting classes they’ve set in sand via a handful of highly regarded recruits, other programs are looking to secure the services of perhaps more lightly recruited players with untapped upside.