SIUE does not appear in the NSCAA (coaches) poll. The Cougars are not in the Top 25. They are not receiving votes. They just are not there.

Yet, if the season ended today, the Cougars would be in the NCAA Tournament even as an at-large bid. Thanks to a challenging schedule to start the year, Kevin Kalish’s  Cougars are #23 in the inaugural men’s college soccer Rating Percentage Index, which was released on Monday.

The RPI is the baseline used by the selection committee for at-large bids to the NCAA Tournament. (We talked with Kalish about his team a few weeks ago LINK to video interview with Kevin Kalish). 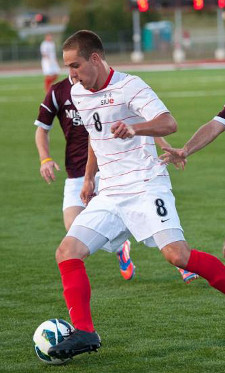 While teams like UC Santa Barbara and Niagara find places on the coaches poll, the Missouri Valley Conference program, which is 10-4 on the year, makes its mark on the more important ranking.

Behind eight goals from sophomore striker Christian Volesky, the Cougars look poised to make the Big Dance for the first time since 2007, but no one is looking that far ahead with SIUE.

Instead, the focus is what is next on the plate for the Cougars, which is Evansville on Wednesday.

“The whole season it has been one game at a time for us,” Volesky told TopDrawerSoccer.com. “Every game is important to us.”

The striker transferred into the Edwardsville program this season after scoring six goals with Denver as a freshman last year.

“One of the reasons that I transferred here is that the coaches let the best players play,” Volesky said about joining a program with nine seniors. “We have been performing really well together. It’s been a smooth transition.”

It’s gone so well for Volesky that he now finds himself at the top of the Missouri Valley Conference and tied for 27th in the nation in goals scored.

The transfer scored three goals last week in the Cougars two games to garner player of the week honors in the Missouri Valley Conference, as SIUE moved into second place in the conference after dropping a double overtime game to Creighton in their opener.

“[Creighton] is up there with Indiana and Akron,” Volesky said in reference to the best teams the Cougars have played this year. “We would like to bounce back [against Creighton] in the conference tournament.”

Before the MVC tournament, SIUE has three more conference games and a trip to Duke on the docket.

The tough schedule has harden the resolve of the Cougars, which behind Volesky and a steady group of seniors look ready to surprise some programs come late November.