Sounders U23 navigating through first season It’s been a debut season full of growing pains for the Sounders U23s.

The PDL club technically isn’t brand new, simply an old club with a new name and ownership group. Formerly Tacoma Tide FC, the team was sold to new owners – Cliff McElroy and Lane Smith – and re-branded to the Sounders earlier this year. 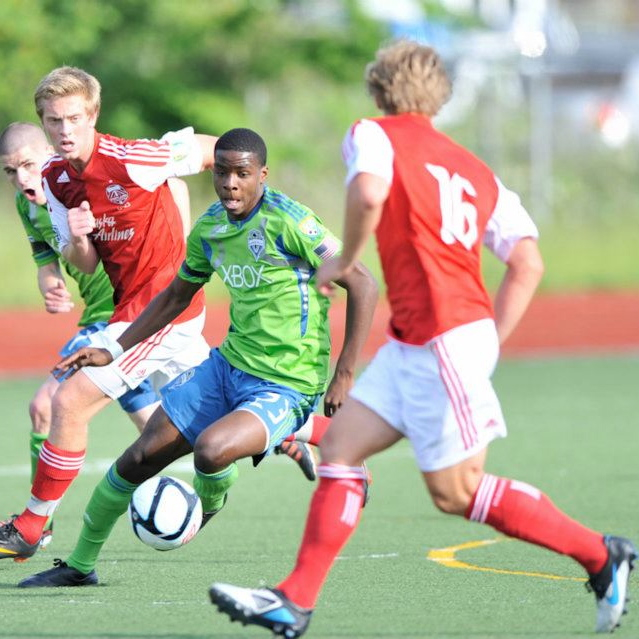 One man had a lot of sway in making that happen: Sounders FC Academy Director Darren Sawatzky, who is also the head coach and general manager of this new PDL team in the Seattle area.

“[The new owners] came and asked if I would be involved,” Sawatzky told TopDrawerSoccer.com. “Being in charge of the Academy for the last three or four years, it makes sense because I know those kids and I’m pretty active in understanding the college game.”

Armed with his knowledge of the recent Sounders FC Academy graduates, Sawatzky formed his current Sounders U23 side using the core of players now off playing at colleges across the nation.

Academy alumni such as Sean Okoli (Wake Forest), Nick Palodichuk (Duke), DeAndre Yedlin (Akron), Sean Morris (Seattle) and Darwin Jones (Washington) all dot the roster, serving a duel purpose – it allows for Seattle’s MLS team to keep a close eye on players throughout the summer, while offering the players a venue to continue developing and stay in shape for the college season.

But having players at that tender age competing in that corner of the country also presents the challenge of going up against clubs like Kitsap Pumas and Vancouver Whitecaps, squads that boast full-time professionals.

“All of our Academy guys are one year into college so we have 19 and 20 year olds playing against 22, 23 year olds, plus your other older age players,” Sawatzky said. “It’s been important for us to mix a couple of older guys in just because you have young men that are good players but they’re playing against men every week.

“In terms of the challenge on the field, when you have boys playing against men, it takes them awhile to catch up, and I think our boys have done a pretty good job.”

That does create the ideal challenge for the younger players, as going up against season veterans can create the right environment for a college player during the summer – otherwise there might be little for a player to do when he’s home for summer break.

It was this motivating factor that led Sawatzky to ensure that the new Sounders U23 team became affiliated with the first team, something that included the team adapting the name of the MLS club.

Seattle’s initiative to offer a summer home for their academy prospects is a much-needed move that is also occurring in other markets, as D.C. United, the Whitecaps, Portland Timbers and Chicago Fire also offer programs of similar nature for returning college players.

“At the end of the day, it makes sense for MLS teams to have some type of intermediate place for those college-age players,” Sawatzky said. “You need something in between the Academy and the first team outside of the reserve team. The PDL has a great venue for that.”

Having former academy players not too far from the first team also provides opportunity for the players to impress and even train up with the pro side.

“Being an affiliate with the Sounders allows the first team to pull some of these players up into first team training thing,” Sawatzky said. “There’s one where the first team can monitor very talented players on a training-by-training basis and also it just gives you an opportunity to have a venue of important, competitive games for those guys to keep going.

“Our first team staff has been out to a few games, we keep tabs and obviously talk regularly about where players are at, so in terms of the developmental piece, they’re constantly checking in.”

From a results perspective, the first Sounders U23 currently sit in fourth place in the Northwest Division with a 5-2-3 record. Development plays a big role in things for the U23s, but winning games, playing attractive soccer and bringing in supporters is right up there as the team looks to build on its first season.

“We want to [attract] fans and the team to do well because people come watch winners,” Sawatzky said. “You never suit up teams to be part of the group, you suit them up to win things.”

Sounders U23 Players to Watch

D DeAndre Yedlin, Akron: The pacey right back was a picture of consistency for the Zips last season and has enjoyed the same kind of summer so far for the Sounders, playing every minute of every match.

F Sean Okoli, Wake Forest: A rising sophomore at Wake Forest, Okoli is currently tied for second on the team in goals scored with three.

MF Troy Peterson, College of Charleston: He may not play at the most prominent program as some of his teammates, but Peterson is quietly doing well in the Sounders midfield, providing stability for his side.

F Aodhan Quinn, Akron: The No. 9 for the Zips, Quinn is one of a few guys who don’t fall into the category of being a Sounders homegrown player. Adds a creative dimension to the attack and has scored three goals on the year so far.

D Anthony Arena, Wake Forest: One of the oldest players on the team – he’ll be a senior this fall – Arena has stood out along the Sounders back line so far. He played his club soccer for crosstown rivals Crossfire.