A tough battle is on the cards for women’s soccer in the Southern Conference. Defending champion Samford will be strong again, but the Alabama school will face no shortage of challengers wishing to claim the league title for themselves.

Following is a look at key returning players for each program.

Goalkeeper extraordinaire Alyssa Whitehead is now playing professionally in Sweden, so one big task for coach Todd Yelton will be to replace her. In the field, Jordan Johnson and Ariane Luckens transfer in from Florida State and South Carolina respectively. 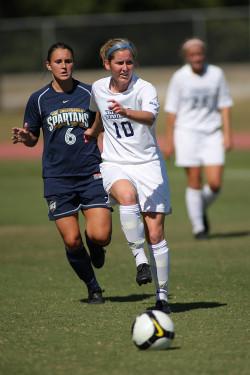 Andrew Burr’s Paladins figure to mount a strong title bid, with a good cast of newcomers and returning starters, including Alyssa Althoff, Ali Simpson, Catie Moore, Indian Robinson, Dee Makris and Hannah Stanifer. Furman will have to find someone to score goals however, as Rachel Shelnutt leaves following her conference MVP season.

J.D. Kyzer is back for his 13th season directing the Moccasins and will look to shore up a defense that yielded 44 goals in 2011.

Offense is a brighter picture, starting with Becca Smith who knocked in 16 goals last yearn. Also back are Crystal Mackezyk and  Kelsey Swann.

The 1-2 scoring punch of Vanessa Aponte and Mariana Garcia return for Bob Winch’s team. Some of the guts and goo positions will have to be replaced however, although Grace Raines and Ruth Leiva will help provide some spine.

The Wildcats return Rachel Newmister, Carly Brahim, Stephanie Piperno and Julie Calhoun as Greg Ashton enters his 9th year at the helm of the program.

For the Phoenix, a lot of experience returning could mean moving to the better side of .500 for coach Chris Neal in 2012.

Clair O’Keeffe, Olivia Mackey, Jennifer McGorty, Catherine Brinkman and Bethany Houpt are just some of the players with plenty of college playing time already under their belts.

Chad Miller’s Catamounts were also around the .500 mark overall last season, and will be looking to move into the black results-wise for 2012.