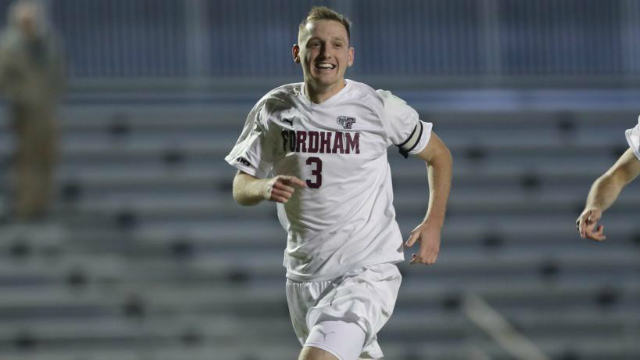 Sporting Kansas City announced on Monday the signing of 21-year-old defender Matthew Lewis as the eighth Homegrown Player in club history. Lewis has signed a one-year contract with options for 2019, 2020 and 2021.

Lewis was a team captain for the Sporting KC Academy U-18s during the 2013-14 U.S. Soccer Development Academy season. He then became a four-year starter at Fordham University in New York City, where he set all-time school records in starts and appearances.

"Matt is a former Academy player who continued to develop and improve throughout his successful college career at Fordham," said Brian Bliss, Sporting KC Director of Player Personnel. "We look forward working with him again as we begin the preseason."

Born and raised in Kansas City, Missouri, Lewis attended Rockhurst High School and anchored the Sporting KC U-18 backline throughout the 2013-14 campaign. The center back was named a finalist for Sporting KC Male Youth Player of the Year at the 2014 Kevin Gray Awards.

Lewis started all 84 college appearances from 2014-2017 - becoming Fordham's career leader in both categories - while also tallying five goals and four assists over his last two seasons. He helped lead the Rams to a pair of Atlantic 10 Championship titles and three NCAA tournament appearances, including a run to the program's first-ever Elite Eight last month. Lewis and the Rams notably fell 2-1 in the quarterfinals on Dec. 2 to a North Carolina team led by forward Zach Wright, who signed as Sporting KC's seventh Homegrown Player last Wednesday.

In addition to winning 39 career games at Fordham, Lewis earned multiple individual accolades as a college standout. He was an All-Atlantic 10 Second Team selection as a sophomore and junior and received 2017 Atlantic 10 Defensive Player of the Year honors as a senior, guiding Fordham to 11 clean sheets in his final season.