If the spring season is any indication, don’t expect Akron men’s soccer team to suffer a significant drop off after Caleb Porter’s December departure.

New head coach Jared Embick guided the Zips to a 3-1-1 mark during the spring slate, capping it off with an impressive 1-1 draw against Maryland on Saturday in College Park.

It was a result and performance that should have Akron fans everywhere feeling a tad more optimistic about the team’s chances in the fall. 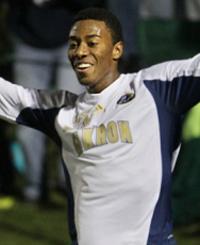 “I think overall it went pretty well,” Embick told TopDrawerSoccer.com of the spring. “We wanted to win [on Saturday] and didn’t but I thought the performance was good. We ran into some injuries at the end, but it allowed us a chance to play some guys some more minutes and develop them. Today you saw that they have a lot of potential as well and they stepped up big time. It’s a tough place to play, but to get a result even if we wanted to win is something to be proud of.”

Of course while the spring schedule doesn’t count for much, the Terrapins featured a starting lineup that featured seven of 11 starters from last fall’s College Cup, including MAC Hermann Trophy winner Patrick Mullins.

Add to that the Zips were without Reinaldo Brenes and Robbie Derschang in their lineup, then saw center back Bryan Gallego depart with a hamstring injury, and it strengthens the notion that this team could spring a surprise or two. During long stretches of the match the Zips controlled possession, and arguably created more chances up front, but lacked the finishing touch or pass aside from the lone second half goal scored by Zac Portillos.

Akron trotted out a 3-4-3 formation against the Terps, part of the tweaking and experimenting all teams go through during the exhibition season, and looks to continue its possession-based style that flourished under Porter.

“We’re trying to continue to get as good as we can with the way we play,” Embick said. “And we’re trying to do it with maybe a couple different looks, so as teams have started to get used to how we play, can we play the same way, maybe move some guys around and throw a wrench in how teams prepare.

“Maybe it’s something we do in the fall, maybe it’s not, but this is the time where you can maybe see how it works, look at some tweaks, for us, we’re going to be the same Akron, known for what we do best and now can we like all teams can we continue to evolve, grow with the game and keep your same philosophy and style.”

That doesn’t mean it’s all on the new players. Returning contributors like Derschang, Portillos, Brenes, Gallego, Eric Stevenson, Aodhan Quinn and Andrew Souders form a strong core. Fringe players in 2012 have plenty of talent too, including expected starting goalkeeper Fernando Pina and right back Saad Abdul-Salaam, who was impressive against the Terps.

“He’s got a lot of potential,” Embick said of Abdul-Salaam. “There’s going to be some growing pains because he’s a young player but you saw what he can do [on Saturday]. He’s got the chance to be something special out there for us.”

They were boosted this spring by the early enrollment of Brazilian midfielder Victor Souto, who showed flashes of quality against Maryland despite playing with a broken hand. The rest of the incoming class, led by ranked recruit Adam Najem of the New York Red Bulls Academy and Chelsea youth player Ismail Seremba, could provide another starter or two as well.

Embick, who played a significant role in recruiting under Porter, hasn’t really seen much change on that front either – and look no further than the recent commitment of U17 MNT defender Bryce Cregan for the class of 2014**.

“For us, because the style stayed, we’ve been getting the players we still want,” Embick explained. “For the public, maybe they need to see stuff like [the game against Maryland] to see we’re not going anywhere, we’re going to play the same way. We haven’t had a problem; we’re still look for certain type of players. I know everybody likes rankings, but at Akron we look for players who can play the way we want to play and we continue to develop them in our system and hopefully, ultimately, we want them to move on and play at the next level. But if not, they’re going to get a good experience, become the best player they can be anyways.”

The real test for Embick and the Zips will obviously come in the fall season. And while the transition has been good and things look promising at the end of a spring season, the challenge level is certain to skyrocket and push the new head coach as the year move along.

“It hasn’t been too big of a change,” Embick said. “Maybe in the fall when you get pulled different directions during the season maybe it becomes something, you’re the one that makes the decisions so you can make a bad one and it’s on you where as before I could always stay on the side of it and we didn’t have to correct much.”