In the past five years in the Ivy League, it’s been mostly a three-horse race for the women’s soccer crown.

Penn, Princeton and Harvard have all triumphed over that stretch, with the Crimson just nipping the Quakers last season.

Despite coming up short, Penn is aiming to be in the thick of the race one again in the fall, and their confidence in the spring season reflects those aspirations.

“I think the expectation of our program annually is to be at the top of the league, whether we win it or not, we want to be in it, and we expect to do the same this year,” head coach Darren Ambrose told TopDrawerSoccer.com. 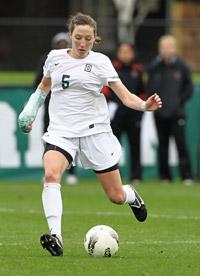 After a strong start to its spring season, however, strep throat has ravaged the team, leaving Ambrose struggling to put together the right numbers in order to move things along the way he intended.

The combination of a few injuries and the bug running through the team has left Penn short of numbers, as they only had 11 players available for a spring game last week against Maryland (a 1-0 loss).

Despite that lack of numbers, Ambrose has been extremely proud of his team as they continue to put forth the effort required to contend again in the fall.

“We’ve got a competitive group, they’ve worked very, very hard, that’s the one thing I can say about the spring,” he said. “They’ve continued to push the envelope from a physical standpoint – they’ve done a great job.”

The biggest task left on Penn’s plate is to fill holes along the back line with the departure of All-Ivy defenders Adrienne Lerner and Colleen Berry. Haley Cooper and Lauren Hammond, two freshmen who might help fill those roles have missed time with the illness.

Penn is also counting on the continuing recovery of Kerry Scalora who tore her ACL last fall, and the improvement of youngsters like Kaitlyn Moore and Megan York to boost its chances.

Catching Harvard is not going to be easy, although the Crimson must find a way to replace significant firepower in forward Melanie Baskind, the Ivy League Player of the Year, as well as other senior contributors like Lindsey Kowal and Becca Millock. The return of sophomore midfielder Peyton Johnson is certain to be a big boost.

One team Penn and Harvard will need to overcome is a resurgent Princeton side, hoping to rebound after a down 2011 year where they went 2-5 in the league. Losing isn’t something head coach Julie Shackford has experienced a lot of in her tenure with the Tigers.

“I’ve been here 17 years and I’ve had two losing seasons, this past season being one of them,” she told TopDrawerSoccer.com. “Even our opponents would say we were a very good team but we couldn’t finish, just missing a little bit of discipline in certain areas.”

Those struggles gave them a clear goal to accomplish in the spring.

“Our focus has been primarily on creating and finishing chances,” Shackford said.

With numerous options to trot out at the forward line – including last year’s leading scorer Jen Hoy, Lauren Lazo, Melissa Downey and Liana Cornacchio all more experienced, Shackford thinks that they can put the scoring issues behind them and return to the top of the pack.

A continued point of emphasis during the spring season for Princeton has been reminding the team they’ve got to accept a higher level of responsibility in order to achieve on field success.

Another program looking to jump back into the mix is Dartmouth. The team welcomed a new coach in Theresa Wagner in 2011, although injuries ravaged the team that fall, resulting in a 2-5 record in the Ivy League.

A lot of the focus this spring has been on implementing a playing style.

“The goal for the spring is to maximize the opportunities we have to work with the students and really start finding a system that will use the most of our strengths heading into the fall…we’re focusing on an attacking-oriented system and also figuring out who is going to be play in the back for us as well,” Wagner said.

The adjustment for Wagner, who was an assistant coach at Stanford prior to her move out east, hasn’t been significant, and she’s confident that bright things lie ahead for the Big Green – starting this fall.

“In the back of our minds the goal is to win the Ivy League and then get to the NCAA Tournament,” she said. “But in order to do that it’s got to be a game-by-game focus. And we’ve got to enjoy the process of going through that game-by-game.”

Jen Hoy, Forward, Princeton: “Jen has done very well this spring,” Shackford said. “She’s been our most dangerous forward.” Last year’s leading scorer for Princeton is already enjoying a strong spring, and if she’s able to build on her eight-goal tally from last fall it bodes well for the Tigers.

Peyton Johnson, Midfielder, Harvard: The departure of Melanie Baskind leaves a big void in Harvad’s offensive production. There’s little doubt that Johnson, a midfielder who scored four goals and picked up three assists last year, has the ability and talent to help fill that gap.

Aurelia Solomon, Defender, Dartmouth: “She brings a great intensity and competitiveness to the field that gets picked up by the players around her,” Wagner said of the rising senior center back. Solomon is going to be one of the team captains in the fall, and her leadership is going to be crucial in Dartmouth’s quest for improvement.

Megan York, Midfielder, Penn: The belief and confidence is there for Penn, despite the numerous obstacles faced in the spring. And York is one of many reasons for that, as she looks to expand her role in her sophomore year this fall after a strong debut season.