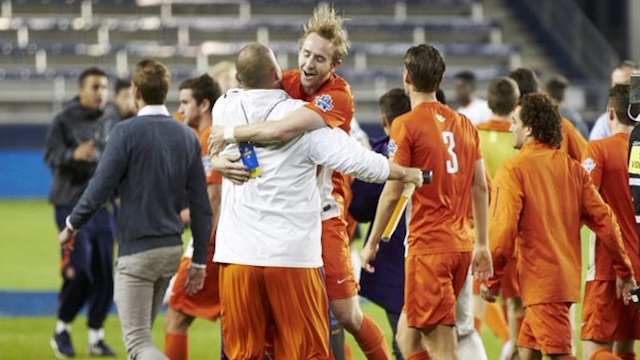 It wasn't always the prettiest route to the championship, but Clemson and Stanford are on the brink all the same.

Clemson and Stanford both labored through arduous 110-minute scoreless marathons at Sporting KC’s Sporting Park, but both sides managed to sweep away the opposition in penalties to book spots in the NCAA finale. For Clemson, which dropped College Cup debutant Syracuse 4-1 in PKs, this is the Tigers’ first trip to the NCAA final since they won it all in 1987. Stanford outlasted Akron in a wearying 8-7 PK barnburner, is back here for the first time since 2002 with a chance to win the thing for the first time.

Clemson and Stanford meet at 2 p.m. ET on Sunday for the right to hoist college soccer’s ultimate prize.

Friday, as a whole, was not chock full of fluid soccer. A generously announced crowd of 4,047 watched two full games and four combined 10-minute overtime periods with zero goals. The penalty shootouts were ample reward for the trouble, and there were chances spread throughout both games, even if there weren’t a ton of them.

The good news for Stanford is that at least one more game as a Cardinal awaits Jordan Morris.

Morris and Stanford parlayed a scoreless 110-minute regular and double overtime period against Akron into penalties, where the Cardinal survived a 10-round marathon to emerge 8-7 winners. That put Stanford into its first NCAA title game since 2002 and on the precipice of its first ever national title in men’s soccer.

Morris is the biggest name in college soccer in some time, and his future as a potential Seattle Sounder next season hung in the balance on Friday. Had Stanford lost, Morris would have immediately been launched into a world of speculation about his future. Seattle reportedly lobbed the highest Homegrown contract in MLS history at Morris this offseason, and Morris won’t make his decision about whether he’ll return for his senior season or go pro public until after the season. That could’ve begun on Friday night.

But it didn’t. Thanks in large part to a gutsy defensive performance and one of the wildest shootouts you’re likely to see.

“You try and set goals you want to have, and this group was flat out, let’s play as many games as we can together,” Stanford head coach Jeremy Gunn said. “We’ve done that. Now we’re in the final. I guess we want to get greedy and win it.”

After a helter-skelter game that didn’t pick up its full momentum until the two extra times, the hinge point of the shootout was in the seventh round. Akron had the last kick, and the shootout was tied at 5-5 with Goncalo Soares stepping up to the spot following a steely save from Jake Fenlason.

All Soares had to do was make the shot and Akron was in the College Cup final. He beat Stanford keeper Andrew Epstein to his left, and the ball rolled toward the corner. But it swerved late and clanged off the post, and it rolled back out on that diagonal that indicated how close it was to shading into the net.

“We got a lucky break there, it hit the post,” midfielder Corey Baird said. “I just told my team that given that opportunity, we were going to make it through.”

And indeed they did.

After that missed kick, Stanford made each of its last three kicks from Brian Nana-Sinkam, Sam Werner and, finally, Baird, to send Stanford through. For his part, Morris drilled his kick - Stanford’s fourth - high and to the right and sent the keeper the wrong way.

The root cause of Akron’s struggles going forward found its genesis in the central midfield. Akron’s central combination of Adam Najem, Victor Souto and Richie Laryea has no equal in college soccer for possession play, but Stanford had a plan. Ty Thompson and Slater Meehan stacked deep on top of center backs Tomas Hilliard-Arce and Brian Nana-Sinkham, which effectively kept everything to their front.

The Zips couldn’t find a way through Stanford’s mine-strewn spine. Unfortunately for the Cardinal, they couldn’t do much with the calm in the storm in an attacking sense.

Everything Stanford does revolves around Morris, and the junior relies heavily on direct service to feed his charging off-shoulder runs. Akron did good work squeezing Morris’s available space and pushing the line high enough that the Sounders Academy product had little space to work with. As a result, the attack couldn’t funnel itself through its most reliably dangerous outlet.

In fact, Morris was caught offside by Akron’s back line five times over the course of the match. He was limited to just three shots, none of which were on goal.

Even still, now Morris has another crack at a national title trophy. Will it be his last act at Stanford? That’ll have to wait until after Sunday.

In the first match of the day, Clemson and Syracuse struggled to establish much of an attacking rhythm, a blight that plagued a defensively tight match that never quite hit its stride.

And yet Clemson was still able to fight through its in-and-out attack thanks to a defensive core featuring center backs Patrick Bunk-Andersen and Kyle Fisher. Those two did yeoman’s work on Syracuse’s quick-fire front line and limited almost all of Syracuse’s chances to relatively benign ones.

Syracuse ultimately out-shot Clemson 15-5, and it took the Tigers almost 45 minutes to finally test keeper Hendrik Hilpert. Substitute Michael Melvin forced Hilpert to dig out a low shot three minutes before half, which turned out to be the only shot the Tigers registered over the entire first half.

The game was a rematch between ACC foes that had already dueled twice this season. Most recently, Syracuse got the better of the more highly ranked Tigers in the ACC tournament en route to a conference title. So surprises were scarce, and at least on Friday Syracuse appeared to have the better of the game plans. The Orange were dangerous in front of goal, and had the ball bounced differently they could’ve expected to score at least once.

“It’s always frustrating when you get chances and opportunities like that and they don’t go your way,” said Syracuse forward Chris Nanco.

And the biggest might haunt one of the nation’s most prolific scorers for a while.

Ben Polk led the ACC in goals this season, but he missed a chance to put the match away with four minutes left when he got behind one-on-one with keeper Andrew Tarbell. But Polk couldn’t pick a corner, and Tarbell knocked out Polk’s down-the-middle blast to preserve the scoreless scoreline. That was far and away the most dangerous chance for either team, and Polk could do little other than drive it clean into Tarbell’s chest.

That was an important moment, because as Clemson’s woes in the attacking third continued - despite a good attacking performance from overlapping fullback Iman Mafi - Syracuse failed to generate much of its own in the two golden goal overtime periods.

So penalties it was. Dreaded penalties.

The Orange did not start auspiciously. Oyvind Alseth had Syracuse’s first penalty saved thanks to a spry dive from Tarbell, and Oskar Sewerin - who did not play in the match before taking a penalty - rifled the team’s third attempt four yards wide. After the match, Syracuse head coach Ian McIntyre defended the decision by calling Sewerin one of the team’s best penalty takers, but the gamble didn’t pay this time.

Meanwhile, Clemson was clutch when it counted. Mafi, Michael Melvin, Thales Moreno and T.J. Casner all converted, and when Casner’s attempt flew into the back of the net, the celebration began.

“Taking penalties is not always the best thing to finish a soccer game, it’s not always the thing you want to do,” Casner said. “At times it’s necessary, and like (Clemson head coach Mike Noonan) said, it can be cruel. But I think it comes down to practice. In training we do penalties almost every single day to get ready for situations just like this. I felt prepared. I wasn’t too nervous when I stepped up to kick it.

“The craziness after was just like you’d expect it to be. I was happy, but now it’s subsided and it’s time to focus on the real prize on Sunday.”