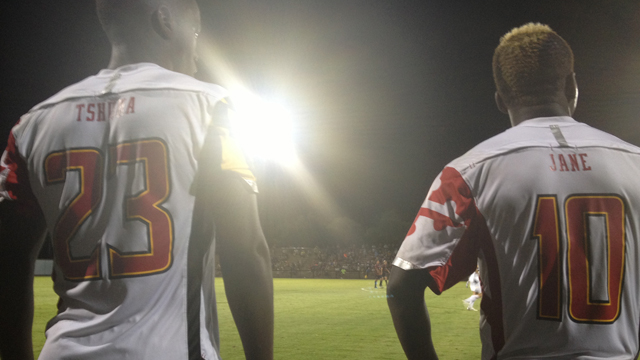 PALO ALTO, Calif. – There was beauty and the beast.

Stanford junior forward Zach Batteer showcased everything that college soccer can be with a goal that most players only dream of scoring in a competitive 3-3 draw between the Cardinal (0-0-1) and Maryland (0-0-1) on Friday night. 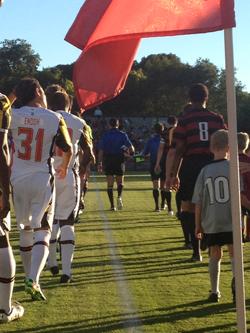 The other 109 minutes of the fixture featured 53 fouls and a seemingly endless sound of whistles and complaints for both benches.

It was college soccer.

With frequent interruptions to the flow of the game, Maryland, the No. 2 team in the country entering the game, never found its rhythm in possession. The Terps were on the receiving end of many of the challenges with the Pac-12 squad dishing out 42 fouls.

Maryland head coach Sasho Cirovski implored the referee to award a yellow card for persistent infringement, but it fell on deaf ears.

Stanford, the No. 20 ranked team, used its speed up top to create problems for the young Maryland defense that featured two freshmen at center back.

Sounders Academy alum Aaron Kovar helped open the scoring in the early stages when he hit a side-volley from the top of the box that deflected off Maryland freshmen Alex Crognale, which left Maryland goalkeeper Zack Steffen wrong-footed. The tally was scored as an own-goal.

The Cardinal doubled the lead when fellow Sounders Academy alum Jordan Morris powered through the Maryland defense and slotted the ball to Batteer for an easy tap-in.

“Our players were in unbelievable shape, and Maryland was shell-shocked by how sharp we were in the first half,” Stanford head coach Jeremy Gunn said after the game. “We were playing against one of the best teams in the country and they started to get their foot on the ball. When you are playing against one of the top teams in the country, you cannot be on top of them for 90 minutes.”

Maryland pulled one back right before half thanks to a Patrick Mullins glancing header off a set piece assist from Michael Ambrose. It was the MAC Hermann Trophy winner’s second shot on goal of the game. Goalkeeper Drew Hutchins did well to turn away a shot by Mullins earlier in the contest.

The two programs exchanged chances early in the second half with Mullins nearly pushing in the equalizer with a shot from six-yards out, but Hutchins was comfortably positioned for the save.

Morris had a golden chance to restore the two-goal lead for Stanford five minutes into the second half when he stole the ball from Crognale and raced in on goal. Crognale did well to put pressure on the Sounders prospect from behind and Steffen came off his line to block the shot and cover up the rebound.

The Terps put the game back on level terms after 56 minutes when Schillo Tshuma headed in a corner kick by Sunny Jane.

It was short lived though.

Batteer restored the lead with easily one of the early candidates for goal of the season. Over 60 yards from goal, Batteer picked up a clearance from the defensive third. He spun past Suliaman Dainkeh and then raced over the midway stripe toward the goal. Batteer slotted the ball around another Maryland defender, and pulled off the same move one more time before bending the ball past Steffen and into the goal.

“World class goal,” Gunn said. “That was absolutely worth the money coming out tonight. Phenomenal goal.”

Once again, Stanford had a chance to put the game away when Kovar was tripped in the box with ten minutes left on the clock. Captain JJ Koval stepped up and blasted the penalty kick off the crossbar.

“Things happen, soccer is not a perfect game,” Koval said. “You move forward. It goes off the crossbar that’s the way it works . . . next one. I step up to take it and I am expected to finish it. I didn’t do it. But it’ll go in the next time.”

Maryland capitalized on the missed chances when Jake Pace rose above the Stanford defense and headed in a corner kick by Tsubasa Endoh. Pace had a header hit off the crossbar earlier in the half, but his timely finish late pushed the game into overtime.

The overtime did not go without incident as Stanford freshman Brian Nana-Sinkam was shown a red card late in the first overtime period after pushing Mullins to the ground. Matt Taylor did an exceptional job off the bench replacing Nana-Sinkam in the lineup for the last ten minutes.

“We know there are areas that we can improve,” Gunn said after the game. “We gave up [three] goals on set pieces. But no matter what the questions that were asked of us, we kept going. And that is all you can ever ask of a team.”

Stanford returns to the field on Sunday with a game against Georgetown. Maryland travels up to Berkeley to play against California, which opened the season with a 2-0 win over the Hoyas.

The captain of the Cardinal enters his senior season with not the same recognition as some of his competition within the conference, but Friday’s performance will quickly boost his name into the conversation for MLS teams.

Koval won nearly every ball in the air that came from a goal kick or a long ball. He got lost in the mix on a few set pieces and Maryland made the opportunities count with three goals from dead ball situations.

Still Koval acquitted himself well against a team that is loaded with professional talent. The senior said that his mentality about this season and his future has not changed since seeing the success of former teammate Adam Jahn at the MLS level.

“It is 100 percent about the team,” Koval said about his goals for this season. “I am focused on the team. I am the captain and I wear that pride. I want to be a model for these guys about working hard and being focused on the season.”