With wins over USC and #2 UCLA, the Stanford Cardinal retained the top spot in the TopDrawerSoccer.com Tournament 64 Women’s National College Soccer Ranking.

The ranking is an effort to project the postseason women's college soccer NCAA Tournament field of 64 each week, including the automatic qualifiers from every DI conference. The ranking update is posted each Monday after reviewing all results from the previous week. 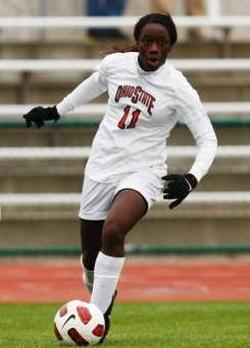 Stanford is now 16-1-1 on the season and atop the Pac-12 standings. UCLA stays at #2 following its first loss of the season. Penn State moves into the top three after a 2-0 win over Purdue on Friday. Prairie View A&M, Oakland,(w) Furman, SIUE, and Auburn all jump into the rankings this week after important conference and tournament wins.

Ohio State senior Tiffany Cameron captured the TopDrawerSoccer.com Women’s National College Soccer Player of the Week honor after she made history in Columbus.

The senior scored two goals in a 5-0 win over Indiana to take over the Ohio State record for most goals scored in a career. The honor, along with the 11-player Team of the Week, is awarded each week after a review of match reports through DI women’s college soccer.

D: Kelsey Mitchell, Virginia Tech – The senior had an assist and helped shut out the potent Wake Forest attack in a 3-0 upset on Wednesday. The win was not enough to get the Hokies into the ACC Tourney, but they are in a great spot for an at-large berth to the NCAA Tournament.

D: Delaney Zalud, Washington State – The junior started the play that led to Brandi Vega’s game-winner against Oregon on Sunday. She was a key piece of the Cougars' defense that only let in one goal and four shots against the two Oregon schools.

D: Claire Magliola, Georgetown – The senior defender stifled the DePaul attack on Sunday as the Hoyas advanced to the semifinal round of the Big East Tournament.

M: Cloee Colohan, BYU – The junior scored three goals in two games as the Cougars pushed the unbeaten run to 15 games and kept hold of the top spot in the West Coast Conference.

M: Dagny Brynjarsdottir, Florida State – The Icelandic sophomore helped the Seminoles cruise past Boston College in the opening round of the ACC Tournament with a goal and two assists.

M: Lauren Lazo, Princeton – The junior had two goals and an assist in a 5-1 win over Cornell, as the Tigers stay in the lead for the Ivy League title.

M: Vanessa DiBernardo, Illinois – The U.S. U20 Women’s National Team midfielder had two goals and an assist to spur a two-goal comeback from the Illini in the final game of the regular season.