Ema Boateng signed a professional contract with Helsingborgs IF (HIF) on Friday, the Swedish club’s website announced. Boateng, the 2012 Big West Conference Freshman of the Year, inked a three and a half year contract with the club that finished sixth in the Allsvenskan, the top flight of Swedish soccer, last season. 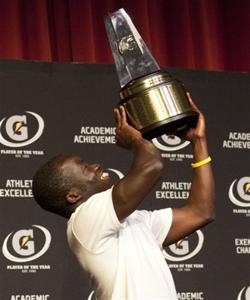 Boateng, 19-years-old, is a former member of the Right to Dream Academy, which helps boys (and now girls) from Ghana gain educational and sport opportunities in other parts of the world. Boateng arrived in the United States in 2009 when he began attending Cate School, a boarding school in Carpinteria, California. His prep career culminated with the 2012 Gatorade Boys Soccer Player of the Year as a junior after scoring 32 goals and dishing out 19 assists in 23 games. He also briefly appeared with Strikers FC in the Development Academy.

The Ghanaian graduated early from high school to enroll at UC Santa Barbara where he scored four goals and had four assists in 18 appearances as a Gaucho. TopDrawerSoccer.com ranked Boateng as the second best freshman at the end of the season rankings.

Blessed with a dynamic change of pace and a powerful left foot, Boateng proved to be one of the most talented players in the collegiate game with the ball. Those same qualities impressed the coaching staff in Sweden where he trained with the club’s U21 side during the summer.

HIF is not the first European club to express interest in the dynamic talent, as Boateng told TopDrawerSoccer.com last year that Manchester City courted him in 2011, but the teenager elected for college instead. Following his debut season in college, there was interest from MLS and UCSB coaches expected Boateng to progress to the domestic league after his sophomore season. He was penciled in as one of the top players for the 2014 MLS SuperDraft, which should still be a strong draft despite Boateng's exit.