Steffen, Acosta back for another U20 crack 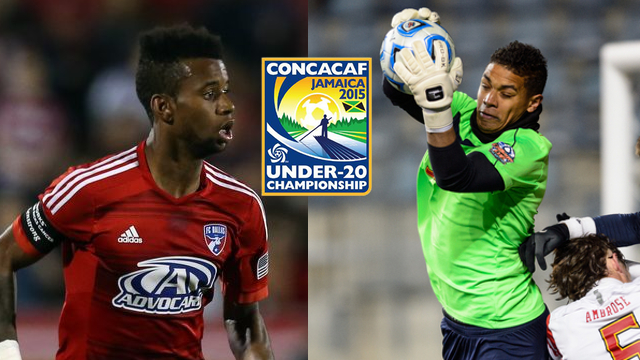 Over a span of nearly two weeks in Puebla, Mexico two years ago, the U.S. U20 team hardly looked troubled amongst its CONCACAF tourney foes. The confident Americans smashed through Haiti and Costa Rica to win their group and beat both Canada and Cuba by two-goal margins en route to a title game match against familiar Mexico.

The game fell apart late, the U.S. taking a 1-1 game into extra time before Mexico scored in the 100th and 113th minutes to haul off a 3-1 win and the CONCACAF trophy. By then, the outcome didn’t matter beyond bragging rights. The U.S. had already qualified for a World Cup in which it wouldn’t emerge from its group alive.

But that loss stuck with the two Americans who return to avenge it. Midfielder Kellyn Acosta and keeper Zackary Steffen didn’t have major roles two years ago, but both return in 2015 as key cogs to a U20 team some are calling the most talented since 2007, when the U.S. mounted a run to the quarterfinals of the U20 World Cup. Neither Acosta or Steffen played a minute during the 2013 CONCACAF tourney. Now, Acosta will wear the armband and Steffen will sire the back line when the U.S. marches to face Guatemala on Friday at 5:30 p.m. ET in the opener at the CONCACAF Championships in Jamaica.

Revenge against Mexico may not be the order of the day, but winning the tournament certainly is. And the team’s two most decorated players are leading the way.

“The main point is to qualify for the World Cup, but we’re also looking to win the tournament,” Acosta said. “At the U20 level for the U.S., no one has won the CONCACAF tournament. That’s one of our other goals as well as qualifying."

It’s true that the U.S. has never won this tournament outright, a fact they’ll try and rectify in this tournament. Still, they won’t need to win to qualify for the the World Cup later this year in New Zealand. This year’s new format split the 12 teams into two qualifying groups of six. The winner of each group automatically qualifies while the Nos. 2 and 3 teams from both groups are re-seeded into a knockout bracket to determine the final two qualifiers. If the U.S. can win its group, it won’t have to trifle with a knockout format to get to the World Cup. That’ll have to mean positive results against the rest of the group: host Jamaica, Trinidad & Tobago, Aruba and Panama in addition to Guatemala.

There’s little question Acosta and Steffen will have a role to play in stabilizing nerves. Last season, Acosta logged 843 first team minutes in 15 MLS matches for FC Dallas, while Steffen played every minute of Maryland’s 13-6-3 season that ended in the NCAA tourney. After an up-and-down 2013, Steffen broke out as a sophomore with nine shutouts and a sterling 0.84 goals against average. In December, he parlayed that success into a contract with German Bundesliga club Freiburg.

Both project as crucial cogs in Jamaica. Steffen sat behind current U23 netminder Cody Cropper in 2013, but he’ll be relied upon this year to carry a back line that’s inexperienced up the middle. Meanwhile, Acosta will be asked to play some combination of a holding and box-to-box midfielder depending on the matchup. The inclusion of Fulham midfielder Emerson Hyndman gives coach Tab Ramos options in the middle, where Acosta could well be asked to sit deep as the primary defensive midfielder.

“Kellyn is one of those guys that’s been involved with U.S. Soccer at every level, so he’s experienced it all,” Ramos told ussoccer.com. “I think for us and for the future of our senior national team, it’s good to bring young players along and give them experiences so that hopefully they can one day be 10-15 year national team players. In both Kellyn and Zack, we have two experienced players who I believe have a good future with the national team.”

For Ramos, this tournament represents a critical juncture in his stewardship of the U20 team. The U.S.’s quality CONCACAF run in 2013 under his watch was darkened by a disappointing World Cup mitigated by a ridiculously difficult group. The gloves are off in 2015. Ramos has had a full cycle to install his playing style and players, and the inclusion of Acosta and Steffen is the height of that ideal.

Mexico is the two-time defending champ, but the U.S. has been knocking. The last time the U20s didn’t win their CONCACAF group was 2003, and aside from a low loss against host Guatemala in 2011 in the quarterfinals, World Cup qualification has been a drop dead given for this side. In that sense, the goals aren’t dissimilar to the full U.S. national team. Qualify out of CONCACAF. Emerge from the World Cup group. Make some noise in the knockout stage.

For Acosta specifically, memories of 2013 are still fresh. After successfully navigating through CONCACAF, the U.S. was hooked into a comically difficult World Cup group with Ghana, Spain and eventual world champion France. For an impressionable player competing up with mostly older teammates, that experience wasn’t lost on Acosta.

“It was a crazy experience,” said Acosta, who signed as a Homegrown with FCD in 2012. “Unfortunately I didn’t get to play. I would have hoped I would’ve got in. But just viewing them and the players like (France midfielder Paul) Pogba and all those guys and teams, the level they’re at, it’s crazy to think they’re right next to me and they’re playing at top clubs. It let me know where I needed to be and what I needed to do to be at that level. It was a good experience for me to view them and to see our guys as well competing against them.”

For now, it’s down to the business of qualification. Depth will tell, considering the U.S. has all of five of its group games smashed into a 12-day span, including the first three games in six days. For Acosta and Steffen in particular, Friday starts a journey they hope ends with silverware in the land of hobbits.

“I think our preparation has come a long way going into Friday,” Acosta said. “I think we have a really strong group. We have a lot of depth. Any player can come in and fill in a position and do a good job. I feel like we work well as a team. I think physical-wise, we’re at a good spot. Our fitness level is very high, and technically I think we have a lot of great players on the ball. Tab likes that a lot, so I feel like we have a good chance in this qualifying group.”