Steffen’s experience to lead the U20s 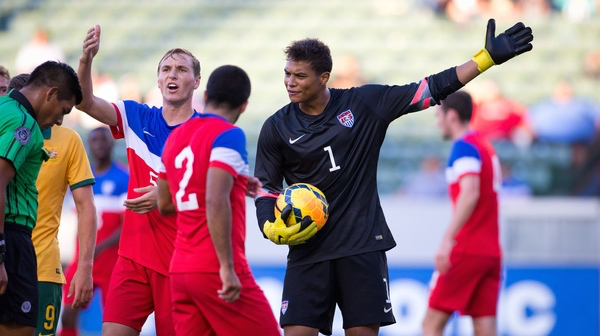 CARSON, California - Zack Steffen holds a distinct role on the U.S. U20 Men’s National Team. The starting goalkeeper for the squad is also one of the few players with any experience at a youth World Cup event. After the surprising and disappointing failed qualifying bid in 2013 with the U17 team, this U20 team lacks much experience at the biggest stage in the youth game.

While Acosta did earn some playing time at the 2013 event, Steffen was left on the bench as one of the reserve goalkeepers. This time, he heads into the tournament as the clear favorite to start and one of the veterans of the group.

“A little bit,” Steffen said when asked if he’s talked to the other guys on the roster about playing in this type of competition. “When we get to Australia, it will start to hit everybody and then the conversations will start coming about that.”

As a player, Steffen is in a much different place than he was two years ago. In 2013, he was the top goalkeeper from his high school graduating class and headed to Maryland with eyes on assuming the starting role upon his arrival. One of the youngest players on the squad, his place on the 2013 U20 World Cup roster was mainly to help him gain some experience.

A couple of years later, Steffen is headed back to the World Cup with two stellar seasons with Maryland under his belt. In December, he elected to bypass his junior and senior years of eligibility and turn professional when he signed with SC Freiburg.

“It’s been great,” Steffen said about the past year. “I love Germany. Maryland was great and I’m very glad that I chose to go there. The choice to leave there and go to Germany was the right choice especially leading up to the World Cup.”

Reflecting on his time with the Terps, Steffen spoke glowingly of what he learned there, but he felt like it was time to leave his comfort zone.

“I think I learned all that I could at Maryland,” Steffen said. “It was time for me to get pushed into a more professional environment.”

He’s getting acclimated to life in Germany, which comes with its own set of hurdles.

“It’s getting there,” Steffen said when asked about his German. “It’s hard. On the field, I’m fine. Whenever I go out to the city, it’s hard.”

With the youth national team, not much has been difficult for Steffen. His athleticism, shot-stopping, and wide wing span has made him one of the most valuable pieces for this team. It’s been a safety net for a team that has experimented with its defense often during this cycle.

Despite the late additions, Steffen remains confident about the group moving toward New Zealand.

“I’m very confident,” Steffen said. “We are vey skillful guys. We’re very technical guys. We will work for each other for 90 minutes straight. I’m very confident and happy with the team that Tab [Ramos] put together.”

Comparing the team to the 2013 group, Steffen looked at the technical quality.

While some of the players directly in front of Steffen will look new to him, there is one player on the roster that he has known for a very long time.

“It’s been great to have [Russell Canouse] on the roster,” he said. “Russell and I go back awhile. We used to play against each other now we are on the same team for the same nation. It’s fun to hang out and relive the past memories while hopefully making some new ones.”

As for memories, Steffen is trying not to look too far ahead with this team.

“I haven’t really thought about that,” Steffen said when asked about his expectations for the World Cup. “I’ve only been focused on the first game and getting three points - a shutout would be nice.”

The U.S. U20 Men’s National Team kicks off action on May 30 in New Zealand against Myanmar.