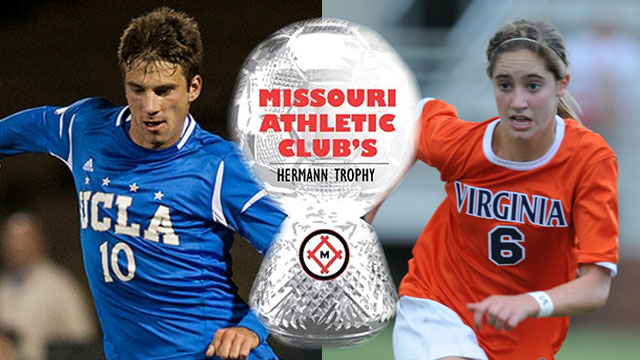 The Missouri Athletic Club’s (MAC) Hermann Trophy is presented to the best female and male players in NCAA Division I soccer. The winners were decided by a vote of NCAA Division I soccer coaches that are current College Services members of the National Soccer Coaches Association of America (NSCAA).

Brian is the eighth player overall to win back-to-back Herman trophies, and the first female player to accomplish the feat since 11-time Canada Soccer Player of the Year Christine Sinclair (University of Portland, 2004 and 2005). Additionally, Brian joins an esteemed list of female soccer players that have been awarded the Trophy in consecutive years, including Sinclair, and Olympic gold medalists Cindy Parlow (UNC)and Mia Hamm (UNC).

This past season, Brian helped lead the Cavaliers to the NCAA Division I Women’s College Cup final for the first time. She was the leading scorer in this year’s tournament with four goals and nine assists, including tying the NCAA Tournament single-game record with five assists in Virginia’s 8-0 first-round win against High Point.

In her 18 game appearances for Virginia, she tallied 10 goals and 14 assists. Brian also became the first three-time NSCAA First Team All-American in the program’s history and was also named 2014 U.S. Soccer Young Female Athlete of the Year.

Brian also pulled double-duty this fall, representing the U.S. in the CONCACAF World Cup qualifying tournament in October. She was the only current collegiate player on the U.S. Women’s National Team.

A 2013 MAC Hermann Trophy finalist, Stolz played in integral part in leading the Bruins through the NCAA Men’s Division I Tournament to national runners-up status. The Munich, Germany, native started in all 24 games for the Bruins, logging 2,054 minutes which is the most among UCLA attacking players. Offensively, he led the team in goals (9) and points (24), and tied the lead in assists (6).

Stolz also earned a number of postseason accolades, including being named First Team All-Pac-12, NSCAA First Team All-Far West and All-American for the second year in a row. He was also invited to the 2015 MLS Combine.