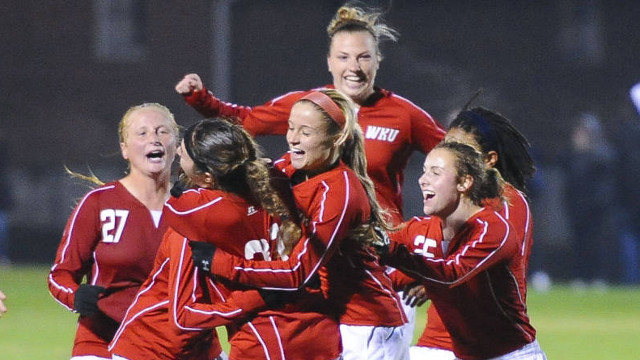 Last season, the Sun Belt Conference had four teams finish in the top 100 in the RPI, the ranking system used for postseason berths and seeding. For a non-power conference, that is a pretty strong collection on good teams in one group.

However, the conference realignment bug is breaking up that grouping. Denver, the top team last year in terms of RPI at 55, packed its bags for the Western Athletic Conference for 2012.
Florida International (RPI: 67) and North Texas (RPI: 77) are leaving the conference in 2013.

However, the one top 100 team that is staying (for at least the time being), Western Kentucky, is making sure that FIU and North Texas’ exits don’t come with hardware attached.

“This is the last year for FIU and North Texas in the conference, so the girls won’t need any extra motivation for those games,” Western Kentucky head coach Jason Neidell told TopDrawerSoccer.com.

Neidell’s group lost in a penalty kick shootout to FIU in the conference tournament last year for a place in the NCAA tournament. The coach expects his group will be back at that point and potentially lifting the hardware in 2012.

“The expectation is to win the conference title every year,” Neidell said. 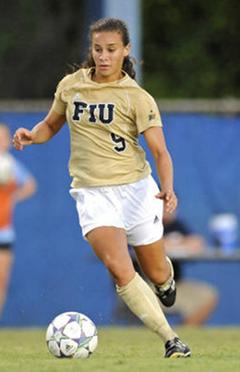 Head coach John Hedlund has always been successful with the Mean Green. Hedlund has been in charge in Denton for 18 seasons now and had a winning record in every one of those seasons.

Part of Hedlund’s success can be attributed to his ability to keep Texas talent from leaving the state. Headlining this year’s roster is Mesquite, Texas-native Michelle Young who led the team in scoring last season with 13 goals and three assists.

The fall will be a big challenge for head coach Thomas Chestnutt. Fresh off an NCAA tournament appearance, there will be some expectations on the Panthers in 2012. Yet, Chestnutt lost eight seniors from last year’s squad and only have two seniors on the roster for this fall.

Sun Belt Conference Freshman of the Year Ashleigh Shim, who had five goals and four assists in 2011, will be expected to carry most of the load in the attack.

The new season offers a fresh set of challenges for coach Jason Neidell, as he searches to replace the stalwarts of the program. Four-year starter and school record holder for shutouts Libby Stout graduated. Perennial Sun Belt first-teamer Mallory Outerbridge also ran out of eligibility in Bowling Green after last fall.

“You don’t replace two players like that,” Neidell said. “We are going to have to do it by committee with the scoring. Hopefully, we have a few players who chip in four or five goals. And replacing the goalkeeper will probably be even more difficult.”

Defender Ali Stahlke (senior) and midfielder Chrissy Tchoula (junior) are expected to be standouts for WKU, but who will step up around them to help fill the voids?

Sun Belt All-Conference second teamers Paige Goeglein, Allison Stallard, and Regina Thomas are all back for their final seasons with the Blue Raiders, which are looking to improve on a fifth place finish in the conference last year.

Yet, with both nations qualifying for the 2012 U20 World Cup in August, Rhoden’s new parts may be late in arriving to the Volunteer State. Domestic recruits like Grace Summers, Emily Jorgenson, and Tori Hawkins look fit to step into the mix immediately as well.

Who will replace Brandi Smith and Landi Wilson?

With the two leaders of last year’s squad gone and a relative small senior class in 2012, the Jaguars are looking for someone to step up and take control.

Perhaps the most likely candidate to take over a leadership role is Clemson transfer Lauren Arnold. The goalkeeper was the Alabama Gatorade Player of the Year three years ago, and now returns home to help the Jaguars after playing the last two seasons in the ACC.

With nine seniors on the roster in the fall, the Red Wolves will be one of the oldest teams in the Sun Belt in 2012.

The Arkansas State faithful are certainly hoping that experience will help, as head coach Tafadzwa Ziyenge continues to improve with each year at the helm.

The person in goal is mystery for ASU with three players getting a shot in between the pipes last year. Megan Stoltzfus wore the gloves in the final game, but junior college transfer Audrey Baldwin might steal the job from all of them when the dust settles.

With an up-and-coming coach, nearly every player back, and a promising recruiting class, the Troy Trojans have a lot to look forward to in 2012.

Williams, a sophomore in the fall, is well on her way to setting the scoring record for career goals (23) at the Alabama program.

The major concern for the Trojans is in the net with the departure of four-year starter at goalkeeper Ashley Branham. Juniors Caitlin Buono and Madison Winter will be fighting with freshman Katelyn Comeno-Lewis for the top pair of gloves.

The antagonist of the Trojans’ 2011 season was road games. UALR was a colossal flop away from Little Rock with a 1-11 record overall.

If head coach Freddy Delgado can turn the corner on fixtures in unfamiliar settings, the Trojans could be a major threat in the Sun Belt in 2012.

However, improving on that road record will not be easy. The Trojans graduated seven seniors from last year’s squad including three of the top four scorers.

With only 13 players on the roster in the spring, UALR brought in seven new faces for 2012 with the anticipation that a few will contribute immediately. Look for freshman Taylor Hoover (Real So Cal) and junior college transfer Paige Mason to help lead the charge among the debutants.

The Ragin’ Cajuns’ biggest crown from last season came off the field with senior Melissa Minton collecting the Miss UL title at the 2012 University of Louisiana Pageant in March.

The results on the field were not quiet as flattering. In the middle of the season, the Ragin’ Cajuns limped through an 11-game losing streak after a 4-1-1 start to the year.

Louisiana-Lafayette should improve in 2012 with all-conference second team defender Gracie Howell-Harries back for her second season plus 11 new freshman added to the fold.

Last season was unexpectedly down for the FAU Owls. Head coach Brian Dooley’s team never found a rhythm and sputtered to a 6-11-1 overall record.

To add insult to injury, leading scorer and junior-to-be Jesse Shugg decided to transfer to Miami(w) for the 2012 season.

However, there are reasons for Owl fans to look forward to the fall. Incoming freshmen Haleigh Stremanos and Natalia Hernandez should help fill the void left by Shugg. Stremanos scored 129 goals and recorded 110 assists during her prep career with American Heritage Plantation High School.

The 2011 season did not go as planned for the University of Louisiana-Monroe women’s soccer program.

With a 5-3-1 record entering conference play, the Warhawks looked like a squad on the upswing, but it was a mirage, as ULM was overrun in Sun Belt Conference play and finished the season on an 11-game losing streak.

The upcoming season offers renewed promise, as new head coach Roberto Mazza takes the reigns. Mazza, previously successful with UAPB(w), will be tasked with righting the ship for the Warhawks.

Of the 13-player recruiting class ULM brought in for next season, Colorado-natives Antonia Land (Colorado Rush) and Karlea Fehr (Real Colorado) are expected to have the biggest immediate impact.