A pair of wins keeps North Carolina atop the TopDrawerSoccer.com Tournament 48 National Ranking this week. The Tar Heels are listed ahead of fellow winners Connecticut and Maryland. Akron holds its place after a win and a draw but New Mexico drops after losing to Tulsa. 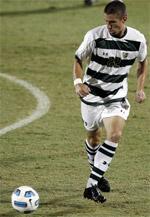 Meanwhile, Ben Sweat of South Florida is our TopDrawerSoccer.com Men’s College Player of the Week. Sweat scored the winning goal against SMU and played well in defense as the Bulls also beat Tulsa.

The honor, along with the 11-player Team of the Week, is awarded each week after a review of match reports through DI Men’s Soccer.

GK: Victor Francoz, Old Dominion – Made 4 saves and posted a shutout as the Monarchs defeated UCF 2-0.

D: Ben Sweat, South Florida – Scored the winner against SMU and played well in defense as the Bulls won a pair of games.

D: Joe Sofia, UCLA – Played  nearly every minute in the back line of UCLA’s overtimes matches with Maryland and Virginia and scored a golden goal in the latter.

M: Martin Murphy, North Carolina – Scored twice as the Tar Heels continued their good start with a pair of wins.

M: Coleton Henning, Furman –Scored 3 goals as the Paladins splits a pair of matches over the weekend.

M: Dylan Tucker-Gangnes, Washington – Again scored twice and played 200 minutes as the Huskies picked up a win and a draw.

M: Khiry Shelton, Oregon State – Had 2 goals and an assist as the Beavers picked up a win and a draw over the weekend.

F: Harrison Shipp, Notre Dame - Scored a goal and provided 2 assists in a win over San Diego State. Also active in the attack during Sunday’s match vs. Clemson(m).

F: Patrick Mullins, Maryland – Scored a goal and had 3 assists as the Terps picked up a win and a draw at home.