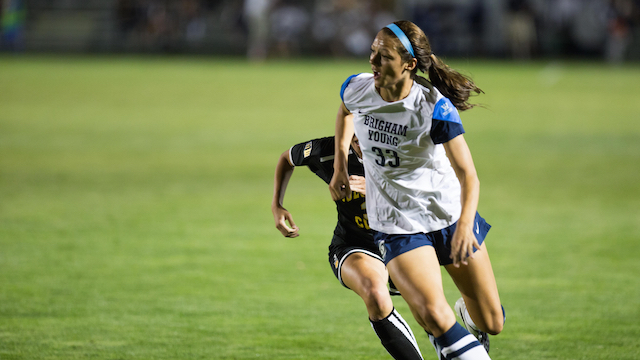 BYU won the WCC in 2014, but Pepperdine carried the banner for the conference longer with a run to the Third Round in the NCAA Tournament. Pepperdine bowed out to UCLA, but it was a noteworthy run from the runner-up in the under appreciated WCC.

BYU’s first round exit should add fuel to the fire for 2015. The Cougars return two stars in the making in Ashley Hatch and Michele Murphy. Hatch will be joined by sister Brianna on the roster this fall. The Cougars will be young in 2015 with only two seniors, but they should still compete for the top spot in the conference.

The Pepperdine program is buzzing after the success of 2014. The trip to the Third Round plus a 16-3-4 overall record were impressive marks for the Southern California school. Pepperdine will have to deal with the losses of Ally Holtz and Lynn Williams this fall, which is a significant pair to replace. There is young talent in the pipeline though for Pepperdine with Hailey Harbison, Jamie Van Horn, Brianna Visalli, and Meagan Harbison all showing promise in 2014.

Is the one-two punch of Andi Tostanoski and Brittany Ambrose enough to push Santa Clara back to the top of the WCC? That might be the question facing the Broncos in 2015. Tostanoski, a goalkeeper, and Ambrose, a forward, made the All-WCC teams in 2014 and look to be key pieces for the Broncos this fall.

San Diego is another squad that has a youngish bounce to the step heading into 2015. The Toreros only have two seniors on the roster, and the junior class is eight deep. There might be an opportunity for some freshmen to step into key roles early as San Diego searches for the top spot in the conference this fall.

Portland is a program that is also experiencing a shift in the guard. Last season’s leading scorer Danica Evans booked to Colorado(w) in the offseason, which left a sizable hole in the Pilots attack. Evans’ seven-goal production will be tough to duplicate, but the Pilots still have Allison Wetherington on the books. Wetherington, a U.S. youth national team member, looks to be the most promising prospect from the Portland program right now.

The Big Sky was a mystery lunch date in 2014. The champions of the conference regular season were bounced in the semifinal of the tournament and No. 3 seed Northern Arizona snagged that elusive bid to the Big Dance. Northern Arizona’s postseason rendezvous did not last long with a first round exit, but the Lumberjacks return eight starters from that squad, which puts them right in line with the favorites in the conference. Big Sky Tournament MVP Haley Wingender is back for her senior campaign after scoring 12 goals in 2014. Cierra Gamble, Natalie Gilbertson, and Wingender make up the core of a strong returning group for Northern Arizona.

Montana, the defending regular season champions, return eight starters as well from last year’s team. Sophomore Hallie Widner looks to be the top prospect of the bunch, but she will have her work cut out for her in 2015 with the losses of Tyler Adair, Brooke Moody, and Chloe Torres from the squad.

Portland State continues the quest for its first trip to the NCAA Tournament. After winning the regular season crown in the Big Sky five times, the Vikings are still searching for their first Big Sky tournament title. The 2015 edition looks to be a tricky one with only four returners back from last season’s team, which finished second in the conference. Cori Bianchini is one of the key players back. She is a two-time All Big Sky First Team honoree and a key piece of the puzzle for the success of the program.

Northern Colorado defender Adrienne Jordan is another one to watch in the Big Sky. The senior was a member of the First Team NSCAA All-Pacific Team last season after guiding the Bears to a 5-4-1 conference record.

The Titans were the dominant side in the Big West last season. Cal State Fullerton was undefeated in conference play and then rolled to the title in the tournament. With only five seniors on last year’s team, all indications look toward the Titans having a real shot at repeating as league champions. Big West Offensive Player of the Year Rebecca Wilson headlines the returners for the Titans in 2015. Wilson had 10 goals and three assists in 2014.

The big story for Cal Poly in 2015 is what can the Mustangs accomplish in Elise Krieghoff’s final season. Krieghoff has been one of the best players in the Big West for the past three seasons and continues to embarrass defenses each year. Now a senior, the Krieghoff era is close to coming to an end. The Mustangs are not a one-trick pony though. Megan Abutin had a breakout showing in 2014 as well. If the potent attack can keep rolling, Cal Poly could send Krieghoff with a trip to the Tournament.

Long Beach State looks like another serious contender in the Big West. The 2011 NCAA Elite Eight squad brings back 10 starters from last year’s team. The one missing returner was arguably the best player on the squad, as Taylor Nelson collected a number of awards in her final collegiate season. Long Beach State beats on Ashley Gonzales, Ashton McKeown, and Mimi Rangel leading the charge in 2015.