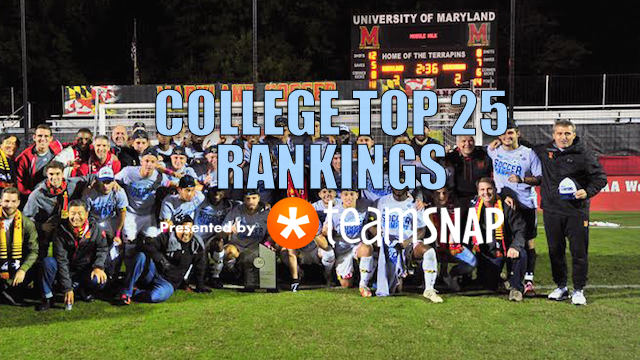 Maryland clinched a share of the Big Ten regular season title on Friday with a wild 3-2 win over Wisconsin. The Terps have won eight games in a row prior to Tuesday’s showdown against American. Prior to Friday’s win against Wisconsin, Maryland had not conceded a goal in five games. The successful streak for the Terps put the Big Ten champions in at No. 1 this week in the TopDrawerSoccer Men’s Division I Top 25.

North Carolina(m) jumps up to No. 2 this week. The Tar Heels defeated in-state rivals Duke on Friday 2-1 in conference play. North Carolina is 3-1-1 in its last five games.

Notre Dame(m) drops down to No. 3 after losing 0-1 to Virginia on Friday in conference play. The Irish are looking to rebound this week with games against Northwestern and Duke.

Clemson remains at No. 4 after a scoreless draw against Boston College on Friday and then a 3-2 win at Brown on Sunday. Clemson takes on No. 9 Syracuse this week in ACC play.

Denver rounds out the top five. Denver defeated Butler and Western Illinois last week. The Pioneers have four games left in the regular season as they look to close out an undefeated regular season.