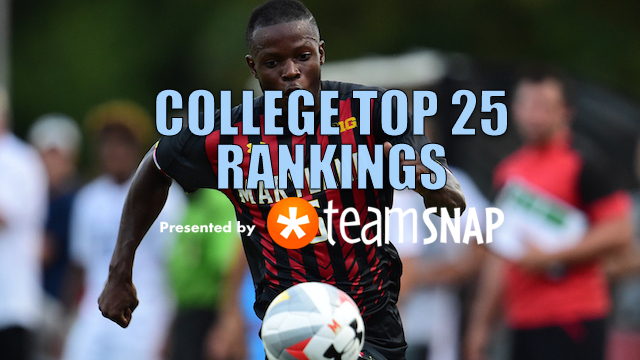 The Maryland Terrapins completed their first unbeaten regular season since 1968. The Big Ten regular season champions needed double-overtime in order to defeat Michigan (3-10-4) in the final game of the campaign. Maryland trailed 0-2 at half time, but the Terps stormed back in the second half and then capped the game with a late goal from senior defender Suliaman Dainkeh. Maryland (15-0-2) enters the Big Ten Tournament as the number 1 team in Division I.

Wake Forest (12-2-3) won the Atlantic Coast Conference Atlantic Division on Friday night with a 1-1 draw against Syracuse (10-3-3). The Demon Deacons enter the conference tournament as the No. 2 seed, and the squad holds the same spot in the TopDrawerSoccer Top 25.

Clemson (11-2-4) moves into No. 3 in the TopDrawerSoccer Top 25. The Tigers defeated Louisville 1-0 in their final regular season game of the season. Clemson enters the postseason phase of the season with the No. 1 RPI as of Monday.

North Carolina (11-2-3) checks in at No. 4 this week. The Tar Heels played to a scoreless draw against Notre Dame on Friday, which was enough for UNC to claim the top spot in the ACC tournament.

Washington (12-4) rounds out the top five this week. The Huskies defeated Stanford in overtime on Sunday night to keep the race for the Pac-12 title alive for another week.