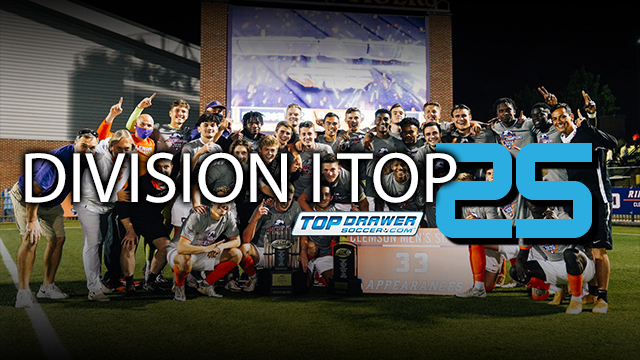 The final Division I rankings of the regular are out on Monday, with a new No. 1 in the men's Top 25.

Clemson won the NCAA tournament automatic qualifier matchup against Pittsburgh, and with Georgetown's loss in Saturday's Big East tournament final, moves into the top spot. Track all of the automatic bids for the spring tournament right here.

There was a Top 10 matchup that decided the Pac-12 championship in men's soccer, as Washington traveled to Stanford for a shot at the regular season crown. The Cardinal came on top with a 1-0 win in overtime, with Zach Ryan providing the game winner. Other conference champs from the rankings includes Seton Hall, Marshall and High Point.

Campbell are the newcomers in the women's Top 25, having upset High Point in the Big South conference tournament final to secure the league's spot in the tournament. Other than that, changes were minimal as conference champions were decided by the leagues that played competitive in the spring.

Florida State remain the No. 1 team, opting to not play any competitive spring games, instead playing exhibitions versus NWSL teams and local college programs.