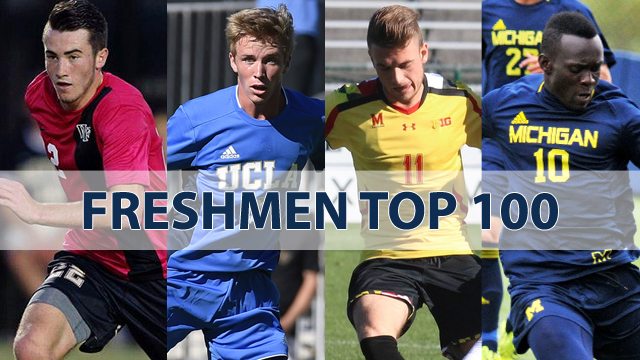 The 2015 freshman class has put its stamp on history. The highly touted recruiting class had a banner year with Wake Forest midfielder Jack Harrison leading the way. Harrison, the 2015 Gatorade National Player of the Year, is also the 2015 TDS Freshman of the Year. The star of the Demon Deacons side takes the top spot in the Freshman Top 100 Postseason update.

UCLA midfielder Jackson Yueill is No. 2 on the list. Yueill, a product of the Minnesota Thunder Academy, was one of the most consistent contributors to the UCLA attack throughout the season. His sharp vision and quality passing helped him earn a spot on the Pac-12 first team as a freshman.

Georgetown goalkeeper James Marcinkowski takes up the No. 3 spot. Marcinkowski earned the starting spot in goal during the first weeks of the season and he never let go. He put together a number of highlight reel saves for the Hoyas while leading them to the No. 3 seed in the NCAA Tournament.

Michigan forward Francis Atuahene is No. 4 on the list. Athena was the Big Ten Freshman of the Year after a stellar debut season with the Wolverines. UC Santa Barbara goalkeeper Justin Vom Steeg rounds out the top five.

Check out the freshman top 100 update.