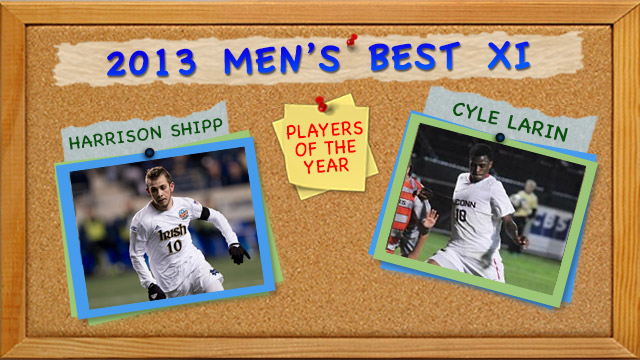 Notre Dame midfielder Harrison Shipp has another honor for his stellar season. The senior midfielder is the TopDrawerSoccer.com Player of the Year for the 2013 men’s college soccer season.

Shipp (12 goals, 10 assists) led the Irish to their first NCAA National Championship with his splendid play in the attack. Shipp was also named the ACC Player of the Year earlier this season in his first campaign in the prestigious conference.

Joining Shipp in the individual honors from Notre Dame is center back Grant Van De Casteele, who made the TDS First Team, and center midfielder Nick Besler, who is on the Third Team.

Connecticut freshman Cyle Larin claimed the award as the TDS Freshman of the Year. Larin finished the season with 14 goals and three assists to led the Huskies to the NCAA quarterfinals. The Canadian bossed defenses throughout the season for Ray Reid’s side.

A trio of Pac-12 stars join Larin on the TDS Freshman Best XI First Team with Cristian Roldan (Washington), Michael Amick (UCLA), and Jordan Morris (Stanford) all find a spot on the squad.

Check out the rest of the award winners below.