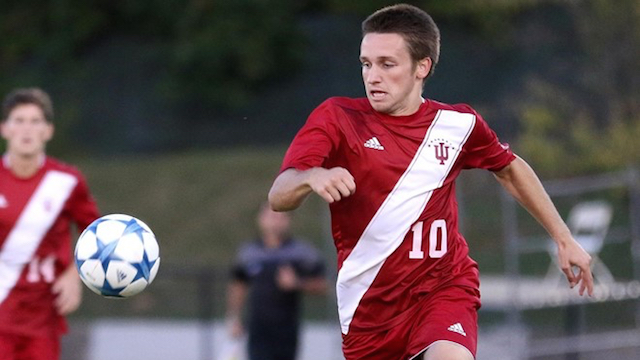 With almost every men’s Division I program in action over the past weekend, there were plenty of candidates for the TopDrawerSoccer Team of the Week. The quantity of submissions made it difficult to trim the field of players down to 11, but there was a clear group that stood out from the pack.

Indiana senior midfielder Tanner Thompson led the way in the first weekend of play. Thompson finished the weekend with two goals and an assist in a pair of wins for the Hoosiers. Indiana head coach Todd Yeagley praised his midfield workhorse in the postgame comments to iuhoosiers.com.

“Tanner showed what you would want for any senior leader,” Yeagley said. “He played like he was a Player of the Year candidate. From the first whistle to the final, he impacted the game in positive ways.”

Thompson was the star of the weekend, but check out who else joined him on the TDS Team of the Week.

GK Ben Lundt, Akron – Lundt recorded a pair of shutouts over the weekend as the Zips started the season with 1-0 win over Georgetown and Seattle. Lundt made 10 saves between the two games.

D Mauricio Pineda, North Carolina – The freshman defender helped set the tone of rhte season in the Tar Heels’ two opening weekend wins. Pineda limited the opposition to only one shot on goal through two games. He also scored his first official collegiate goal in the 3-0 win over St. Louis on Sunday.

D Brandon Aubrey, Notre Dame – Aubrey, the senior defender, was named the Most Outstanding Defensive Player at the 2016 Mike Berticelli Memorial Tournament over the weekend. Aubrey scored the lone goal in Notre Dame’s 1-0 win over New Mexico. He also scored against UC Irvine in a 4-0 win on Friday. Aubrey led the defensive effort that only allowed one shot on goal in the win over Irvine.

M Tanner Thompson, Indiana – Thompson converted a kick from the spot with 30 seconds left in the game against New Mexico, which allowed the Hoosiers to claim a 1-0 win in the opener. He followed up that performance with a goal and an assist in the 3-1 win over UC Irvine on Sunday.

M Maximilian Schulze-Geisthovel, Boston College – The senior transfer from St. Leo made an immediate impact at the Division I level with two goals over the weekend. Schulze-Geisthovel scored one goal in the 2-0 win over Quinnipiac and he followed that up with another goal in the 3-2 victory over Boston University. He notched 5 shots on goal in his 92 minutes of play.

M Napo Matsoso, Kentucky – Matsoso opened his season with a dominant performance as he led the Wildcats to a 4-0 win over Marquette on Friday. Matsoso scored twice and recorded an assist in the big win.

F Abdou Thiam, Connecticut – Thiam scored a goal and recorded an assist in Connecticut’s season opener against Iona. The sophomore forward followed that up with another goal on Sunday in a 2-0 win over Omaha.

F Pat Flynn, Bowling Green – Flynn had two assists in Bowling Green’s 4-0 win over IUPUI on Friday. Flynn followed that up with a two-goal performance against Appalachian State on Sunday in a 3-1 win. The senior now has 25 goals and 60 points in his collegiate career.

F Jordan Jones, Oregon State – Jones scored goals in games against DePaul and Wright State over the weekend. The junior forward scored the lone goal for the Beavers in a 1-1 draw against DePaul on Friday. He had a goal and an assist against Wright State in a 3-0 win on Sunday.

F Johannes Pieles, Syracuse – The freshman forward from Germany scored both goals in Syracuse’s 2-1 overtime win over Loyola Marymount. He contributed an assist in the 3-0 win over Massachusetts. Pieles finished the weekend with four shots on goal.

F Diego Campos, Clemson – Campos scored twice in Clemson’s 2-1 win over Providence in the home opener for the Tigers. The junior forward notched his first game-winner of the season as the Tigers improved to 2-0 on the season with his two-goal performance on Sunday.