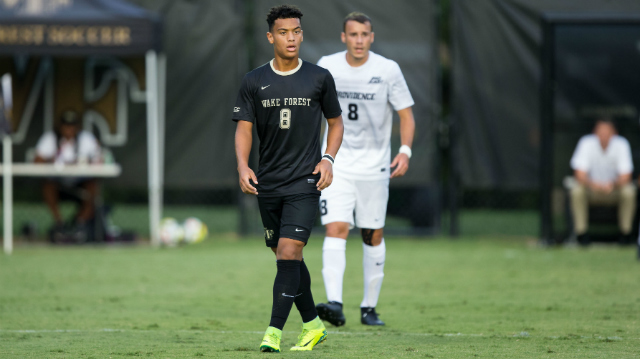 Even in the environment where the best American young talent is skipping college, promising domestic players are still out there.

In the opening weekend of the men’s DI college season, Wake Forest midfielder Brandon Servania enjoyed a storming introduction to the game. The FC Dallas Academy product scored two goals and had four assists as the Demon Deacons surged to a pair of dominant wins over Rutgers and Providence over the weekend.

Check out who joins Servania on the first TDS Men’s Team of the Week for 2017.

D Giovanny Vazquez, Utah Valley – It was a banner opening match for Vazquez, who led his back line to a shutout against Akron, and scored the game winner in a 1-0 victory.

D Jimmy Fiscus, Michigan State – Two games on the road, and two shutout wins for Fiscus and the Michgan State back line. The senior defender played the full 90 in wins against SIUE and Saint Louis.

M Brandon Servania, Wake Forest – Handling set piece duties played a big part in Servania’s success over the weekend, as two of his four assists came from corner kicks. However, the future is bright after a pair of storming performances for the Alabama native.

M Jad Arslan, West Virginia – A long trip to California went extremely well for the Mountaineers. Arslan scored two game-winning goals. The first came in a 1-0 win against California on Friday night, and he did the same thing, grabbing an early goal in a 2-0 defeat of Santa Clara.

F Christopher Brennan, Bowling Green – Brennan played a major role in the Falcons’ lone match last week, a 2-0 win over IUPUI in Saturday night’s regular-season opener. He assisted on the opening goal, and converted one of his own to seal the victory.

F Elvir Ibisevic, Omaha – Building off a strong opening season. Ibisevic scored the second-fastest hat trick in DI soccer history, needing just over 10 minutes to find the back of the net three times in a 5-1 win against Virginia Tech.

F Mauro Cichero, SMU – The senior was another hat-trick hero from the weekend, scoring three times in SMU’s 3-2 victory against UC Davis.

F Benji Michel, Portland – It was a four-goal outburst for the sophomore striker. After opening his account on Friday night in a 3-2 loss against UNLV, he scored a hat trick in Sunday’s 6-0 win over Fairfield.