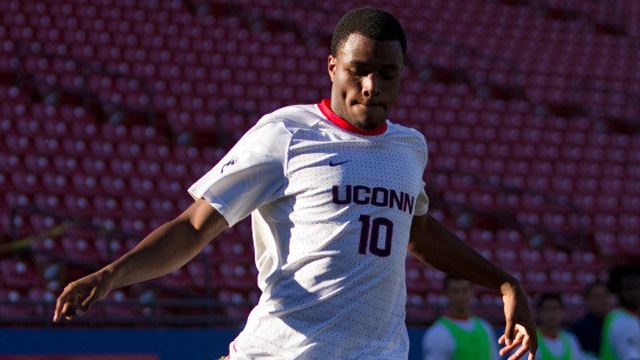 Down 2-0 early in the first half, the season nearly looked it was all over for the Connecticut Huskies. On the road against the No. 1 overall seed, UCLA, Connecticut looked like it was in a deep hole.

However, freshman Cyle (pronounced Kyle) Larin helped the squad climb out of the hole and push its way into the elite eight. Larin scored twice in a 3-3 draw and then converted his penalty kick, which ended in a 5-4 victory for the Huskies. 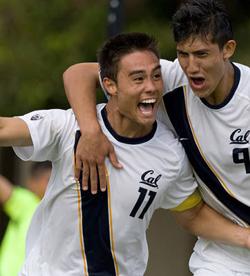 GK Zackary Steffen, Maryland – The freshman goalkeeper made five saves for the Terps in a 1-0 win over UC Irvine on Sunday. A few of Steffen’s saves were jaw-dropping efforts that somehow managed to keep Irvine off the score sheet.

D: Riley McGovern, New Mexico – Every member of the New Mexico defense deserves a spot on the Team of the Week after limiting Penn State to zero shots on goal over 90 minutes. However, McGovern claims the place thanks to being in the right spot at the right time with his second half goal.

D: Scott Thomsen, Virginia – Thomsen delivered a brilliant free kick goal from over 20 yards out to give the 10-man Virginia Cavaliers the 1-0 lead midway through the first half on Sunday. Thomsen and the rest of the Virginia defense kept Marquette at bay on the way to a 3-1 win.

D: Michael Harris, Washington – Via the Washington men’s soccer Twitter account, Harris and fellow senior defense Taylor Peay ended their careers with the Huskies going 9-0-0 all time against Stanford after defeating the Cardinal 1-0 on Sunday. Harris had the assist on the winning tally from Ian Lange.

M: Alec Sundly, California – Sundly scored the lone goal in California’s 1-0 win over Coastal Carolina to earn a spot in the Elite Eight and a rematch against Maryland. Sundly has five goals in his last four games.

M: Michael Calderon, New Mexico – Calderon had the assist on both of New Mexico’s goals on Sunday as the Lobos beat Penn State 2-0 in front of 3,347 fans. Calderon’s creativity in the middle of the field was the difference in breaking down a very good Penn State defense.

M: Evan Panken, Notre Dame – Panken scored the game-winning goal midway through the second half in Notre Dame’s 4-2 victory over Wake Forest on Sunday. Panken and the Irish held off a talented Wake Forest side to earn a trip to the Elite Eight.

F Adam Montague, Michigan State – With a thunderous strike, Montague sent Michigan State into the Elite Eight with a 1-0 win over Georgetown on Sunday. Montague and seven saves from goalkeeper Zach Bennett helped the Big Ten squad pull off the upset.

F: Patrick Mullins, Maryland – Of course, it would be Mullins to score the game-winner against UC Irvine to send the Terps to the Elite Eight. The senior was in the right spot to put home the cross from Tsubasa Endoh, which stood up to be the difference in the game.

F: Michael Gamble, Wake Forest – The sophomore had a goal and an assist for the Demon Deacons in a losing effort to Notre Dame on Sunday. Gamble was in the thick of things from the opening whistle and created some trouble against a very good Notre Dame defense.