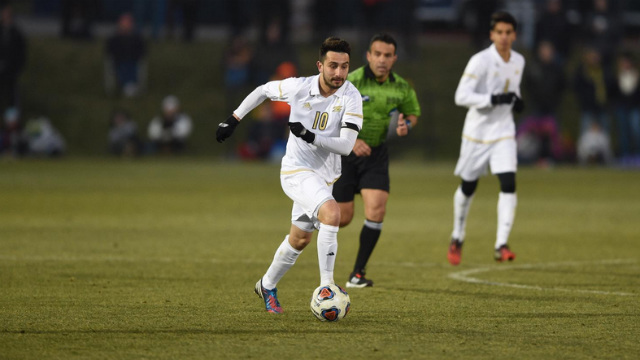 The men’s College Cup field is set, with the quarterfinals wrapping up the final step before four worthy programs travel to KC.

The latest TopDrawerSoccer Player of the Week – and last of the 2015 season – booked his team’s trip to the final, as Adam Najem scored a beautiful free kick in overtime to win the game.

See the rest of the team below.

GK Andrew Tarbell, Clemson – The junior netminder helped secure Clemson’s return to the College Cup. Along with several steady saves in regulation, Tarbell saved a couple of efforts in the shootout. Those stops proved crucial when Maryland’s Dakota Niedermeier proved equal to the task, saving two efforts of his own. That cue Thales Moreno’s conversion from the spot.

D Louis Cross, Syracuse – Contending with Boston College’s dynamic attack is not an easy task for any back line, and Cross and the Orange defense managed to keep the shutout, limiting the Eagles to just two shots on target in a 1-0 win.

D Brandon Vincent, Stanford – While Vincent missed a penalty kick in overtime that could’ve prove costly, it was the only blemish on a superb game for the senior left back. His teasing cross found the head of Morris for the opener, and Wake had little joy down his flank through most of the night.

M Richie Laryea, Akron – It was always going to be a shootout in Akron, and the Zips prevailed 3-2. Once again, Laryea continued to impress with his dynamic ability, setting up Stuart Holthusen’s second goal.

M Thales Moreno, Clemson – The super sub continued to inject life into the Tigers’ attack, scoring their only goal of the game and converting the decisive penalty kick in the fifth round.

M Corey Baird, Stanford – There was a noticeable difference in the danger created by Stanford when Baird was on the field. Most of the team’s success came down the left side, where Baird complemented Jordan Morris and Vincent with great success. He spotted Vincent’s run down the left that led to the

M Adam Najem, Akron – Akron’s crafty midfielder scored the goal of his dreams on Saturday, netting a golden goal free kick from 25 yards out to secure a 3-2 win and a return to the College Cup for the Zips.

F Jordan Morris, Stanford – At times against Wake, Morris created dangerous moments on the break for Stanford, scoring the first goal of the game for the Cardinal on the way to a 2-1 win in overtime.

F Ben Polk, Syracuse – Polk’s ability to score big goals in big moments continued in the team’s win over Boston College. The forward scored the only goal of the game in a 1-0 victory to book a trip to Kansas City.

F Stuart Holthusen, Akron – The focal point of Akron’s dynamic attack, Holthusen capped off a strong effort with a goal and a team-high five shots in the win over Creighton.

F Fabian Herbers, Creighton – The Bluejays’ season may have come to an end on Saturday, but Herbers continued to show why he is a strong Player of the Year candidate. The German attacker setup both goals as Creighton twice erased one-goal deficits, despite ultimately coming up short on Najem’s special strike.