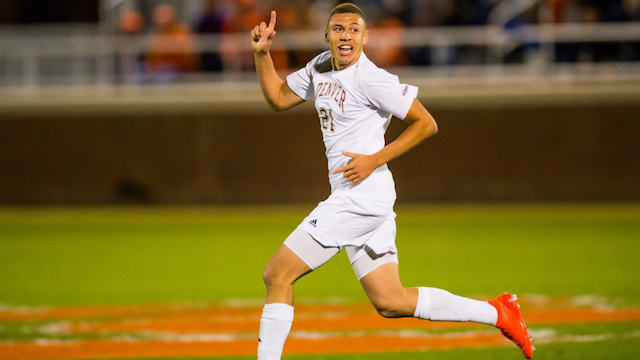 The Elite Eight round for the Men’s Division I Tournament provided plenty of drama with late goals and big saves. The performances were enough for some players to crack the TopDrawerSoccer Men’s Team of the Week.

GK Andrew Epstein, Stanford - Epstein made four saves and recorded the shutout in Stanford’s 2-0 win over Louisville on Saturday. Epstein’s four-save performance was the most by any goalkeeper that advanced to College Cup.

D Kortne Ford, Denver - Ford scored the game-winner against Clemson on Friday night as the Pioneers claimed a spot at College Cup. Ford’s header helped Denver win on the road against a very good ACC squad. His play in the defense limited Clemson to only two shots on goal in the game.

D Brian Nana-Sinkam, Stanford - The senior defender put in one of his best performances against Louisville to help lead the Cardinal to a repeat appearance in College Cup.

M Mauricio Pineda, North Carolina - Pineda recorded the assist on Drew Murphy’s game-winner on Friday night. The freshman played all 102 minutes of the game and helped shut down the Providence attack.

M Derek Waldeck, Stanford - Waldeck recorded the assist on Langsdorf’s game-winning goal against Louisville on Saturday. The freshman provided the delivery off of a corner kick.

M Ian Harkes, Wake Forest - Harkes recorded an assist on Twumasi’s game-winner. He also controlled the game from the center of the field and limited Virginia Tech to only five shots in the game.

M Sam Werner, Stanford - Werner sealed the win for Stanford with a tremendous free-kick goal against Louisville. It was the second goal of the season for the redshirt sophomore.

M Ema Twumasi, Wake Forest - The freshman midfielder scored two goals in Wake Forest’s 2-0 win over Virginia Tech on Saturday. Twumasi was a constant threat in the game and was justly rewarded with a pair of goals to send Wake Forest into the semifinal round.

M Drew Murphy, North Carolina - Senior transfer Drew Murphy has not played much this season for the Tar Heels, but he came up big when it mattered the most. Murphy recorded four shots in 21 minutes of play on Friday. One of those four shots found the back of the net for the golden goal in double overtime.

F Foster Langsdorf, Stanford - Langsdorf was credited with the game-winning goal against Louisville, which was his 15th of the season. The forward has been remarkably consistent with goals in his last four games and goals in six of his last seven games for the Cardinal.