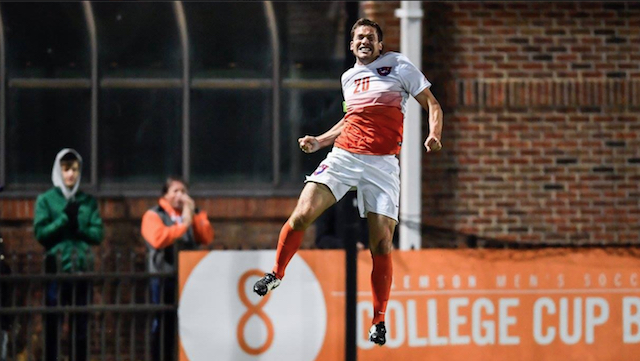 The TDS Men’s Division I Team of the Week features some of the best players from the college game. These players help push their teams into the Elite Eight round of the competition with stellar performances over the weekend.

Check out who made the TDS Men’s Team of the Week below.

GK Colin Miller, Providence - Miller finished the game against Creighton with nine saves on 10 shots on goal. His stellar play in net allowed the Friars to advance to the Elite Eight with a 2-1 win over Creighton. Miller improved to 14-1 on the season as the starter for the Friars.

D Aaron Jones, Clemson - Jones recorded an assist on Sunday in Clemson’s 3-1 win over Albany. He also played all 90 minutes and helped limit Albany to only two shots on goal.

M Chandler Crosswait, Denver - Crosswait nodded home his first goal of the season on Saturday as the opening goal against Washington. Crosswait’s goal set the tone for the game and he also had a stellar game outside of the timely strike.

M Forrest White, Virginia Tech - Virginia Tech continues to get good production from players on the bench. In Sunday’s win over Indiana, it was White with a beautiful strike to net the game-winning goal in overtime.

M Cameron Lindley, North Carolina - Lindley provided the assist on the game-winning goal for the Tar Heels against Syracuse on Sunday. His through ball to Jeremy Kelly sent his fellow freshman in on goal. Lindley was also in the middle of a couple of other chances for the Tar Heels to extend the lead throughout the game.

M Julian Gressel, Providence - The senior continued his hot streak in the postseason with a goal and an assist against Creighton on Sunday. Gressel led the Friars to a 2-1 win over the Jays in the NCAA Tournament Third Round game.

M Jeremy Kelly, North Carolina - Kelly skated past the defenders and slotted the ball into the bottom corner of the net for the game-winning goal against Syracuse. It was an exquisite finish from the freshman in difficult conditions.

F Jon Bakero, Wake Forest - Bakero scored both goals in Wake Forest’s 2-1 win over SIUE in the NCAA Tournament Third Round. The forward led the team in shots and shots on goal on the day as the Demon Deacons secured a spot in the Elite Eight.

F Mohamed Thiaw, Louisville - Thiaw finished the game with a goal and an assist as he helped Louisville to a 3-1 win over Notre Dame in the NCAA Tournament Third Round. The forward has 12 goals this season.

F Andre Shinyashiki, Denver - The sophomore forward scored his eighth goal of the season in the second half against Washington on Saturday. The goal held up as the game-winner as the Pioneers claimed a 2-1 win over the Huskies in the NCAA Tournament Third Round game.

F Austen Burnikel, Clemson - Burnikel scored two goals and assisted on the other in Clemson’s 3-1 win over Albany on Sunday. The forward scored the opening goal just beofre half itme and then nabbed the game-winner with 10 minutes left. He assisted on the final goal of the game for a solid five-point outing.