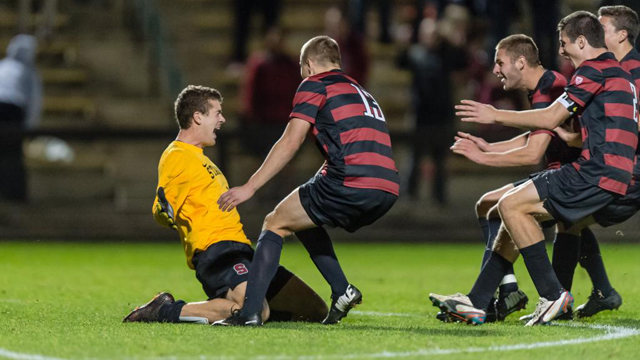 The second round is over, and its time to hand out some honors with the TDS Player and Team of the Week. There were a number of great performances from the past week with both first and second round games played. 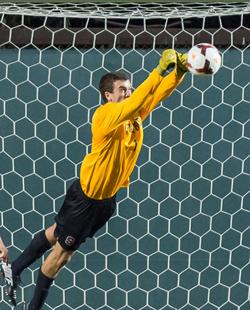 However, one performance stood out from the crowd. Stanford goalkeeper Drew Hutchins, in essence, willed his team into the second round with a remarkable performance against Loyola Marymount. The goalkeeper had the assist on the game-tying goal with only 17 seconds left in regulation. Then, he saved three penalty kicks and converted his own attempt to defeat LMU 3-2 in PKs. On Sunday, he only had to make one save in a 1-0 win over Cal State Northridge.

Check out who joined Hutchins on the TDS Team of the Week below.

GK Drew Hutchins, Stanford – Hutchins did it all in the first round against Loyola Marymount. He had the assist on the game-tying goal with only 17 seconds left in the game. In the penalty kick shootout, he save three kicks and then converted the final one to send Stanford into the second round. On Sunday, he made one save on the way to a shutout victory over Cal State Northridge.

D Martin Seiler, Penn State – The senior center back helped the Nittany Lions to shutout victories over the week to push the Big Ten side into the third round. Seiler was up to the battle on Sunday against the physical UC Santa Barbara forwards. Seiler and Penn State held UCSB to only one shot on goal in the second half.

D Michael Sauders, Maryland – Sauders scored the opening goal on Sunday in a 3-1 win over Providence. The freshman finished with three shots on the game, as he joined the attack frequently.

D Kevin Cope, Michigan State – Cope assisted on the game-winning goal in double overtime against Louisville on Sunday. The senior center back also shut out the Cardinals for over 106 minutes on the day.

M Alec Sundly, California – Sundly led the charge on offense for the Golden Bears on Sunday with two goals and an assist in a 3-1 win over Bradley. His assist led to the game-winner from center back Steve Birnbaum, who returned to the lineup after missing the previous two games.

M Leo Stolz, UCLA – Stolz record three assists in UCLA’s 4-0 win over Elon on Sunday. The three-assist performance was the most by a Bruin in a NCAA Tournament game since 2002.

M Cristian Roldan, Washington – It continues to be a dream season for the Pac-12 Freshman of the Year. Roldan had a goal and an assist in the 4-2 victory over Seattle on Sunday in the second round game. Roldan has seven goals on the season.

M Harrison Shipp, Notre Dame – The Wizard of South Bend provided the goods on Sunday with a two-goal performance to push the Irish into the third round of the NCAA Tournament. Shipp has 11 goals on the season.

M Eric Bird, Virginia – Flap your wings, young man. Bird’s trademarked celebration was on display once again on Sunday with his seventh goal of the season in a 2-0 win over St. John’s. Bird also provided a beautiful assist on Ryan Zinkhan’s goal.

M Joey Dillon, Georgetown – Dillon was the boss of the midfield on Sunday, as he dictated the game and helped the Hoyas ease into the third round with a comfortable 3-0 win over Old Dominion.

F Coco Navarro, Marquette – Navarro played every minute in the bitter cold on Sunday and then scored the game-winner in the first overtime period to help Marquette to its first ever NCAA Tournament victory.