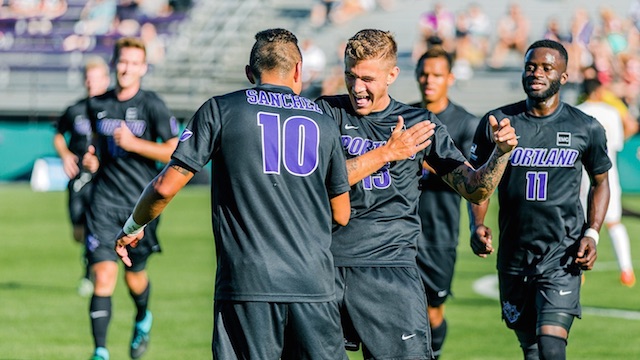 With every conference in action last week, there were plenty of noteworthy performances to highlight on the TopDrawerSoccer Men’s Division I Team of the Week. There were some key players who stepped up to help secure results, and some surprising showings from big underdogs.

Check out who made the TDS Team of the Week below.

GK Danny Vitiello, Albany - Vitiello made six saves in Albany’s 2-1 win over Syracuse. He only had to make two saves on Friday in the 4-0 win over Vermont as Albany finished the week with a perfect 2-0 record.

D Brad Ruhaak, Akron - The senior defender was a key player for the Zips in the 4-0 win over Buffalo in the conference opener on Friday. Ruhaak scored the game-winner and then led the defense to a dominant performance that shutout the talented Bulls’ attack.

D Elliot Bentley, Hartwick - Bentley recorded an assist in the 1-0 win over Coastal Carolina. The defender helped slow down the potent Coastal Carolina attack throughout the game as Hartwick came away with a big 1-0 win.

M Eddie Sanchez, Portland - The senior midfielder scored three goals as Portland rolled to a 5-1 win over Gonzaga in the conference opener for the Pilots on Sunday. Sanchez scored the game-winner in the 60th minute on a free kick.

M Ian Harkes, Wake Forest - Harkes finished the game against Notre Dame on Saturday with eight shots. Five of those kicks found the target as Wake Forest forced Notre Dame goalkeeper Chris Hubbard into nine saves on the day. Harkes recorded the assist on the equalizer in the 67th minute.

F Alec Lasinski, Loyola-Chicago - The sophomore forward scored in both of the Ramblers’ wins last week. Lasinski had the second goal in the 2-0 victory over DePaul. He followed that up with the opener against Drake in a 4-0 win for Loyola-Chicago.

F Pat Flynn, Bowling Green - Flynn recorded an assist in Bowling Green’s 2-1 win over Northern Kentucky last week. Flynn’s assist came on the equalizer for the Falcons. Flynn followed that up with the game-winner against West Virginia as Bowling Green posted a 2-0 record for the week.

F Mohamed Thiaw, Louisville - Thiaw continued his hot streak with two goals last week. Thiaw scored a goal in the 6-0 win over Belmont. He followed that up with the only goal in the 1-0 win over Syracuse. The former junior college star has nine goals in 12 games this season.

F Abdou Thiam, Connecticut - Thiam had a goal and an assist in Connecticut’s 5-0 win over Cincinnati. He notched the opening goal on Saturday. Thiam leads the Huskies in scoring with eight goals this season.

F Ivan Abramovic, Massachusetts-Lowell - The redshirt freshman forward scored twice in the Riverhawks 4-0 win over UMBC. Abramovic netted the opener, which held up as the game-winner.