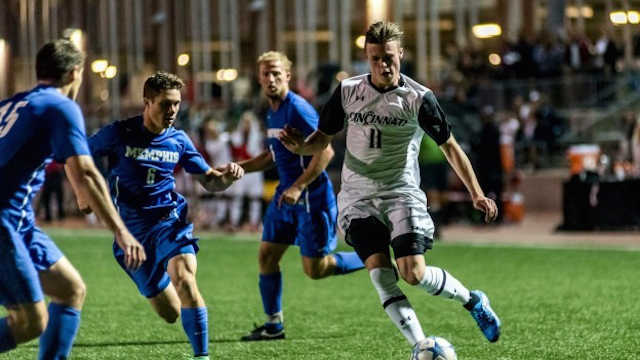 There were a number of significant men’s Division I soccer games last week. As conference rolled past the midway point in the campaign, the games picked up some added significance with eyes toward the postseason.

Check out which players made a mark in the big games in the TopDrawerSoccer Men’s Division I Team of the Week below.

GK Elliot Panicco, Charlotte - The redshirt freshman recorded seven saves in Charlotte’s 1-0 win over Clemson last week. The upset win was the sixth shutout of the season for the goalkeeper.

D Alex Crognale, Maryland - Crognale scored two goals in Maryland’s 3-2 win over Wisconsin. The gigantic center back scored the late equalizer for the Terps in the game that clinched a share of the Big Ten regular season title for Maryland.

D Justin Crichlow, Harvard - The defender recorded an assist in the 2-0 win over Boston College. He was also a key piece in the 1-0 win over Brown as Harvard picked up two wins last week.

M Alejandro Chavez, Tulsa - Chavez scored the equalizer against Creighton in the midweek battle. Chavez scored late in the game with Tulsa trailing against the Bluejays. Tulsa would go on to score the game-winner late. Chavez followed up that performance with the game-winning assist against UCF on Saturday.

M Corey Baird, Stanford - Baird finished the week with three assists as he helped Stanford pick up two wins in Pac-12 play. Baird record two assists in the 3-1 win over San Diego State. He added another assist on Sunday night in the 3-0 win over UCLA.

M Ian Harkes, Wake Forest(m) - Harkes scored the game-winning goal against Louisville on Saturday. Harkes converted a penalty kick and Wake Forest held onto a 2-1 victory. Wake Forest’s dominance in the midfield limited Louisville to only three shots on goal in the game.

M Adam Wilson, Cincinnati - Wilson scored one goal and recorded four assists over the course of two games last week. Wilson had a goal and two assists in the 3-0 win over IUPUI. He had a pair of assists in the 4-0 win over Temple.

F Julio Moncada, UNC Wilmington - Moncada had two goals and an assist last week for the Seahawks. Moncada scored two goals in UNC Wilmington’s 3-1 win over Hofstra. He contributed the lone assist in the 1-1 draw vs. College of Charleston.

F Sam Gainford, Akron - Gainford was the catalyst for the Zips in the 7-0 win over Northern Illinois last week. Gainford scored the first two goals of the game as Akron raced out to an early lead. He then added an assist on the third for a five-point outing.

F Benji Michel, Portland - The freshman forward scored two goals for the Pilots in a big 3-2 win over San Francisco last week. Michel was also stellar against Santa Clara in Portland's 1-0 win as Portland improved to 3-0 in WCC play.