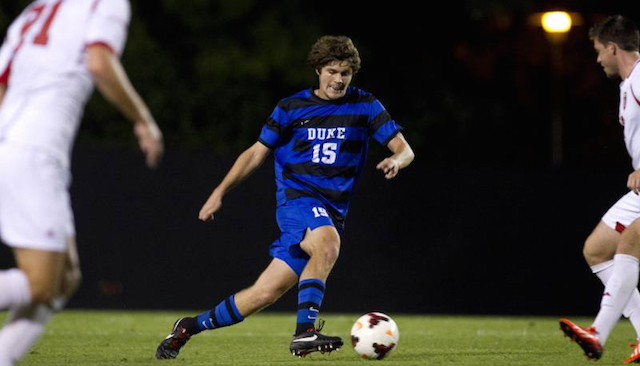 The past weekend in men’s college soccer featured a number of crucial conference games. There were plenty of individual performances that stood out from those games. Check out which players cracked the TopDrawerSoccer Team of the Week.

Please send future Team of the Week nominations to college@topdrawersoccer.com.

D Tommy Gudmundsson, Coastal Carolina - The sophomore defender was a key piece of the Coastal Carolina side that picked up wins over Campbell and Liberty. Gudmundson scored the lone goal in the victory over Liberty.

M Eduardo Alvarez, Elon - Alvarez scored a goal in Elon’s 2-1 win over UNC Wilmington. He then had an assist in a 2-1 win over James Madison as Elon improved to 12-2 on the season.

M Zachary Mathers, Duke - Mathers scored three goals and added an assist in Duke’s massive 6-2 win over NC State on Friday. Mathers led the way as the Blue Devils charged to the ACC win over the in-state rival.

M Richie Laryea, Akron - Laryea scored three goals in Akron’s 4-0 win over Northern Illinois. The sophomore midfielder played a big role as Akron picked up an important conference win against the Huskies. Laryea leads the team in goals with nine this season.

M Kyle Culbertson, Ohio State - Culbertson had the assist on the lone goal in Ohio State’s 1-0 win over Kentucky. He followed that up with the game-winning goal against Wisconsin. That goal sealed a program record eighth win in a row for the Buckeyes.

M Arun Basuljevic, Georgetown - Basuljevic scored the game-winner against Depaul on Saturday for the Hoyas. He also had a goal against Marquette last week as the Hoyas picked up a pair of conference wins.

M Jacori Hayes, Wake Forest - Hayes scored the lone goal in Wake Forest’s 1-0 win over North Carolina in the big game of the weekend. Hayes was a critical piece of the game plan for the Deacons in the win over the Tar Heels.

F David Olsen, Seattle - Olsen scored twice in Seattle’s 3-1 win over Bakersfield on Friday. He then scored the game-winner on Sunday in a 1-0 victory over San Jose State. It was his seventh goal of the season.

F Jordan Morris, Stanford - Morris scored the game-winner against UCLA and then scored the equalizer against San Diego State. Stanford went on to win that game as the Cardinal improved to 11-1-1 on the season.