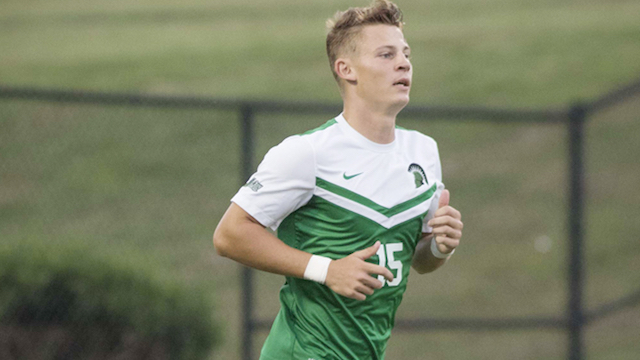 Gordon Wild is unstoppable. Through the first four weeks of the season, the freshman forward is terrorizing defenses in Division I. His hot streak rolled on this past week as he found the back of the five times in two games.

He was just one of 11 players to stand out from the crowd on the TDS Team of the Week. Check out who joined him.

Please email future Team of the Week nominations to college@topdrawersoccer.com.

GK Tyler Blackmer, Wright State: The junior goalkeeper made five saves on Sunday for Wright State in a 1-0 overtime win over Cleveland State. He was also in goal for Wrigth State’s 3-1 win over West Virginia last week.

D Nicholas O'Callaghan, Elon: The freshman defender had a goal and an assist for Elon in a 3-1 win over Drexel to open up league play over the weekend. O’Callaghan was also a key piece of the Elon squad that defeated Wake Forest 1-0 during the midweek game.

D Luke Waechter, Charlotte: The junior defender anchored the 49ers defense that only allowed one goal in 220 minutes of play last week. Charlotte’s two opponents, William & Mary and Old Dominion, only put six shots on goal in those two games - both ended in draws.

D Zachary Carroll, Michigan State: Carroll headlined a strong defensive effort from Michigan State against Maryland on Friday. The Spartans only allowed the Terps to get one shot on goal as the teams settled for a scoreless draw in the Big Ten game.

M Jake Rozhansky, Virginia: Rozhansky scored twice last week as Virginia picked up wins over NC State and James Madison. Rozhansky had the game-winner in both games. He was also a key piece of the effort to shutout the opposition in both games as well.

M Noah Keats, Incarnate Word: Keats scored a hat trick for Incarnate Word in a 8-1 win over Central Arkansas last week. The senior midfielder scored the first three goals of the game and put it out of reach before the horn for halftime.

F Niko Hansen, New Mexico: Hansen had two goals last week as the Lobos rolled to a pair of wins. Hansen scored the lone goal in a 1-0 win over Missouri State on Friday. He followed that up with the equalizer on Sunday with just over five minutes left in the game. New Mexico won the game in overtime.

F Jordan Morris, Stanford: Morris scored the game-winning goal for Stanford on Sunday in a 1-0 win over Davidson. He also scored on Friday in a 3-1 win over San Francisco. Morris has four goals this season as the Cardinal keeps on rolling.

F Jalen Brown, Xavier: Brown scored the game-winner for Xavier on Tuesday in a 1-0 victory over Notre Dame. He followed that up with the game-winning assist on Saturday in a 1-0 win over Bucknell. Brown is tied for third on the team with four points.

F Alan Winn, North Carolina: Winn was the leading force in the attack for the Tar Heels, as North Carolina nabbed a 4-2 win over Notre Dame in ACC play on Friday. Winn scored twice including the game-winning goal as the Tar Heels rolled to the win at home against the Irish.

F Gordon Wild, USC Upstate: The freshman sensation is tearing up college soccer. Wild has 12 goals in only six games for the Spartans. Wild scored five goals last week. He notched a hat trick in a crazy 5-4 win over Winthrop. He added two more goals on Saturday in a 3-2 win over Gardner-Webb.