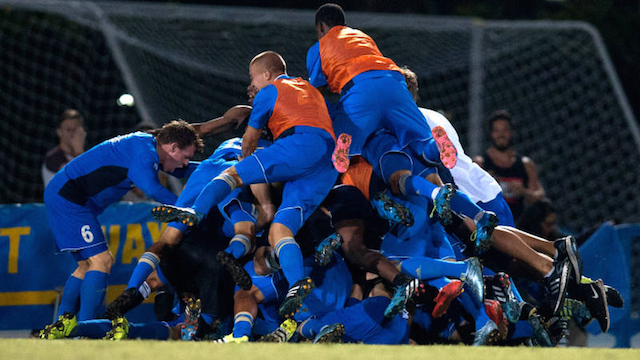 If this is the week that UCLA turned around its season, Seyi Adekoya will be one of the major reasons why. The sophomore forward scored the game-winning goal on Friday against VCU. He followed up that performance with two goals against UC Irvine in the best comeback victory of the season. Adekoya’s timely strikes paved the way for the Bruins to pick up a pair of wins as the preseason favorites attempt to get back on track prior to the start of conference play.

Below is the latest men's Team of the Week. Please email future nominations to college@topdrawersoccer.com.

GK William Pyle, South Carolina - Pyle improved to 3-0 on the season over the week with wins over Elon and New Mexico. Pyle made six saves between the two games. The two goals that he conceded came from set pieces as he helped lead a new defense to a pair of wins over ranked competition.

D Kyle Bjornethun, Seattle - Bjornethun scored twice in the dying moments against Oregon State to help Seattle claim a 2-1 win over Oregon State on Sunday. He was also a key piece of the defense that defeated Washington earlier in the week.

M Rodrigo Saravia, Florida Gulf Coast(m) - Saravia had two assists for the Eagles in a 2-1 win over Brown over the weekend. Saravia provided the late assist on the game-winner as FGCU climbed to 2-2-1 on the season.

M Will Puckett, Wofford - Puckett scored the lone goal on Tuesday in Wofford’s 1-0 win over Charlotte. The senior midfielder was the key catalyst for the Terriers in the win over Charlotte. His long range bomb helped Wofford improve to 5-1-1 on the season.

M Daniel Ocana Garcia, Iona College - The freshman midfielder from Spain had three assists in Iona’s 6-1 win over Niagara to open up conference play. The newcomer leads the team in assists with five in eight games.

M Matt Danilack, Dartmouth - Scored the game-winning goal for Dartmouth in a 3-0 win over Hofstra on Saturday. Danilack was a key player for the Big Green in the win over a ranked opponent. The sophomore midfielder did exceptionally well to put his header away with under 10 minutes left in the game against Hofstra.

F Seyi Adekoya, UCLA - Adekoya scored his fourth goal of the season on Friday in a 2-1 win over VCU. He followed that up with two goals on Sunday as the Bruins pulled off the best comeback of the season against UC Irvine. Trailing by three goals and down a man, Adekoya helped spur the Bruins onto a 4-3 win in overtime with his two goals.

F Luis Betancur, Florida International - Betancur scored a hat trick against Florida Atlantic last week as FIU rolled to a 7-2 win in the conference opener. Betancur followed that up with the game-winner against Marshall for his fifth goal of the season.

F Ben Polk, Syracuse - Polk netted a hat trick against Pittsburgh to clinch the first ACC win of the season for Syracuse. He also had an assist on Tuesday in Syracuse’s 3-1 win over Binghamton. Polk has three goals and four assists this season.