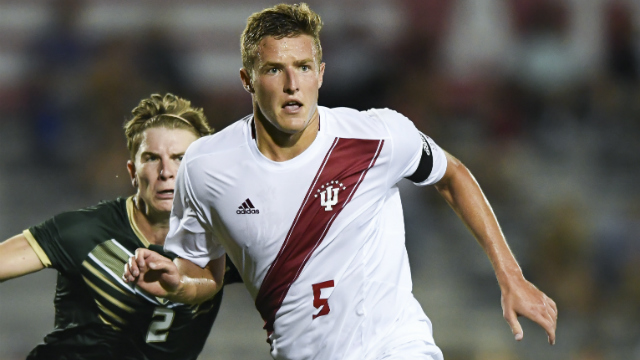 In the end, Maryland or Indiana were unable to find the back of the net in Friday night’s marquee clash in College Park.

But the defensive effort from Indiana was notable, as they held the Terps without a shot on goal.

Helping to spearhead that accomplishment is Grant Lillard, the TopDrawerSoccer.com Player of the Week. The senior center back led a collaborative shift that prevented Maryland’s high-powered offensive from finding the frame.

The only reason that Lillard and IU didn’t secure the road win stemmed from another player on the Team of the Week.

GK Dayne St. Clair, Maryland – If not for the Canadian goalkeeper, Maryland loses Friday night. He made a few impressive saves, including in overtime, to preserve the shutout.

D Aaron Herrera, New Mexico – The U.S. U20 right back filled up the stat sheet as the Lobos strung together three wins in a row. Herrera had two assists on Friday in a 2-1 win against Cal State Northridge, and scored the winning goal in 2-1 victory over UC Irvine on Sunday.

M Emanuel Perez, NC State – Freshmen are boosting the Wolfpack early in the season, Perez scored the game-winning goal against Clemson, as NC State nabbed a big win early in the ACC slate. The local recruit has made an instant impact in his first season in college.

M Cole Nelson, Omaha – A central figure in Omaha’s early season success, Nelson’s presence in central midfield helped provide the platform for a pair of wins over the past week against UC Riverside and Bradley. Nelson also assisted on a late equalizer by Elvir Ibisivec, first of two goals scored in 17 seconds.

M Rollie Rocha, Tulsa – The senior struck twice from the penalty spot, the first two goals Stanford’s conceded all season, as the Hurricanes upset the Cardinal in Palo Alto on Saturday. Rocha also went 90 minutes in a 3-2 road win over Santa Clara two days before.

M Brandon Bye, Western Michigan – Stringing together three wins over the past week, Bye scored in all three games, including two game winners.

M Fredinho Mompremier, Fairleigh Dickinson – With a game-winning goal on Labor Day last Monday against Army and another in a win over Iona, Mompremier is on back-to-back Teams of the Week. The transfer has led FDU to a scintillating 5-0 start to the season.

M Marcel Zajac, Akron – On the road against UC Santa Barbara, Zajac produced a pair of impressive finishes to help Akron secure a 3-1 win against the Gauchos.

F Brian White, Duke – Already out to a strong start to the season, White scored twice and had an assist as the Blue Devils remained unbeaten with a draw and victory.