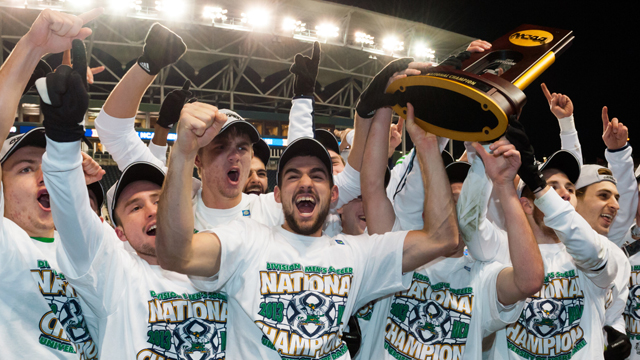 Defending champions Notre Dame tops the list heading into the season. The Irish lost out on star playmaker Harrison Shipp, who is now tearing up the grass with the Chicago Fire, along with a couple of key contributors. Head coach Bobby Clark does have quite a bit of talent to work with as Patrick Hodan, Nick Besler, and others assume the spotlight for this fall.

Just behind Notre Dame is perennial Pac-12 favorite UCLA, which continues to stack top recruiting classes on top of itself. The Bruins are leaning on seniors Leo Stolz, Aaron Simmons, and Earl Edwards Jr. to help guide the star-studded through a challenging early schedule.

Newly minted Big Ten program Maryland takes up the third spot. The Terps are a bit of a mystery in 2014. All-everything forward Patrick Mullins is off in MLS now, and there is not an obvious replacement for him. Top recruit Romain Gall picked a professional deal with Columbus Crew over the ruckus of College Park. Dan Metzger, Zack Steffen, and Mikey Ambrose headline a strong list of returners. Transfer Mael Corboz was one of the best players in college soccer last season at Rutgers. If he can duplicate his form with Maryland, the Terps will be tough to stop.

Virginia checks in at the fourth spot. The Cavaliers have to deal with the early departure of Jordan Allen, but the return of Eric Bird, Riggs Lennon, and Darius Madison means that this attack could be one of the best in the nation. It appears Calle Brown has beat out four other goalkeepers for the starting spot with Virginia this fall in one of the most loaded positions for any program in the country.

Jamie Clark’s Washington side rounds out the top five. The Huskies lost secret weapon Michael Harris from last year’s squad, but bring back Spencer Richey, Darwin Jones, Cristian Roldan, James Moberg, and a host of other quality options. It should be a heck of a battle in the Pac-12 this fall between the Huskies, the Bruins, and Stanford.

And check back later this week for the release of the Top 100 players in men’s college soccer.