It was the week of the freshman, with a number of key contributions coming from new faces to the collegiate game. Highly regarded Sounders prospect Jordan Morris scored his first and second collegiate goals to help Stanford pick up a big road victory over UC Santa Barbara. 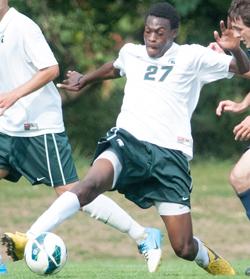 The list goes on and on, but it was a junior who made the biggest mark over the course of the last week. Michigan State midfielder/defender Fatai Alashe had a goal in the 2-2 draw against No. 3 Creighton and then added an assist in the 2-0 win over Northern Illinois.

The veteran leader is currently filling in for the injured Kevin Cope, which has Alashe occupying a spot in the defense for the Spartans. The junior still gets forward on set pieces and has been a menace to nearly every ball in the area this season off of corner kicks.

Meanwhile, Michigan State has shut out three of its last four opponents as it gears up for Big Ten play starting this weekend.

GK Gavin Snyder, Navy: With shutouts against Virginia Tech and Boston University, Snyder extended his streak to 267 minutes without conceding a goal. Snyder made eight saves in the games to pick up the wins.

D Marquez Fernandez, UMBC: The outside back scored the game-winning goal on Saturday in double overtime to help UMBC keep the perfect season alive and improve to 9-0-0 on the campaign. Fernandez also anchored the defense in a 1-0 win over George Mason.

D Fatai Alashe, Michigan State: It was a great week for the Spartans with a 2-2 draw at Creighton and then a 2-0 win over Northern Illinois. Alashe was a major contributor to both results with a goal and an assist in total.

D Max Lachowecki, Notre Dame: The left back scored his first goal of the season on Friday in a 3-1 win over Duke. He also helped the Irish defense limit the talent Blue Devils attack to only four shots on goal during the game. Lachowecki has played every minute this season for the Irish.

M Andrew Brody, Louisville: Louisville opened conference play with a 3-0 win over Temple thanks to Brody’s goal and assist on the day. The Real Salt Lake-Arizona alum leads the team in assists with five on the season.

M Zach Bolden, Denver: The senior midfielder was instrumental to a successful weekend for the Pioneers. He provided the assist on Friday for the game-winning goal against Portland. He scored the game-winner on Sunday against Cal Poly.

M Brandon Medina, Northwestern: With a goal and an assist, Medina had his hand in all the action for the Wildcats in a 2-0 win over Michigan on Saturday. Northwestern has now rattled off seven start wins since starting the season 0-1-1.

F David Goldsmith, Butler: With two goals and an assist last week, Goldsmith helped spur the Bulldogs to wins over Indiana and Villanova. His second goal against Indiana was his seventh of the season and the overtime game-winner.

F C. Nortey, Marquette: Scored the lone goal (in spectacular fashion) against Xavier to give Marquette an opening win in Big East play. Nortey is rounding back into form after losing his 2012 season to injury.

F Max Hasenstab, Winthrop: The forward from Germany scored three goals and provided an assist for the 7-0-1 Winthrop Eagles. The freshman had the game-winning goal in both games over the weekend and now leads the team in scoring with six goals and five assists.

F Jordan Morris, Stanford: Seattle Sounders Academy alum notched both goals for the Cardinal in a 2-1 overtime victory over UC Santa Barbara on Friday. The goals were the first of the season for freshman.