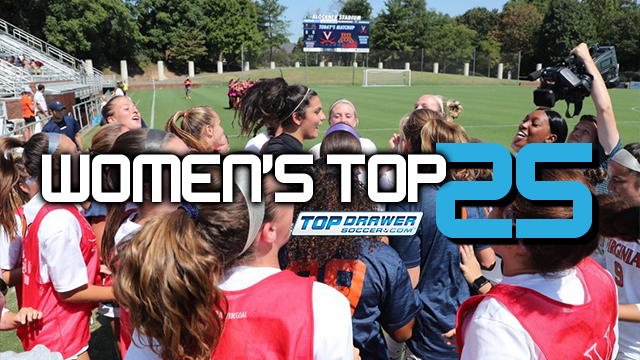 It was a week of unpredictable results in women's Division I soccer, which saw a number of teams shuffle into this week's rankings.

Virginia holds on to the No. 1 spot after defeating Virginia Tech on Thursday and drawing Duke on Sunday.

The Cavaliers remain just in front of North Carolina, which continued to roll past ACC foes, defeating NC State by a 1-0 score and then easing to a 3-0 victory against Notre Dame.

Stanford, which won a wild opener against USC by a 3-2 score on the road, checks in at No. 3, followed by Florida State and BYU, rounding out the top five.

A handful of new teams popped up into this week's Top 25, including California, Brown, Louisville and Wisconsin.