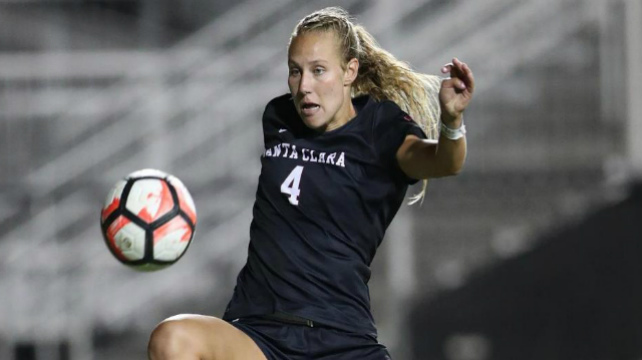 The opening weekend of the women’s Division I college season provided a number of spectacular goals, exciting games and a first taste of what teams will look like this season.

One of the teams that enjoyed a stellar opening weekend was WCC side Santa Clara. Hosting Pac-12 sides USC and California, the Broncos secured a pair of overtime wins that will provide a nice boost at the season’s start.

Defender Kellie Peay played an integral role in both results. She scored the overtime winner from a set piece against USC, and helped secure a shutout in a 1-0 overtime victory against Cal. Peay earns the first TDS Player of the Week honors for 2016.

See the entire Team of the Week below. Nominations can be sent every week to college@topdrawersoccer.com.

GK Anna Buhigas, Lipscomb – It was a big weekend for the senior goalkeeper and Lipscomb, which secured its first-ever win against an SEC opponent, defeating Vanderbilt 2-0. Buhigas made a total of nine saves across two games.

D Kellie Peay, Santa Clara – Peay’s effort across two matches made it a weekend to remember for the Broncos, as she scored a game winner and contributed to a tight 1-0 overtime win.

D Claire Wagner, Clemson – The center back played all but five minutes in Clemson’s two wins, including a 2-0 shutout against Aurburn. Wagner got on the score sheet in a 3-1 victory against Georgia.

M Taylor Racioppi, Duke – A rising star for the Blue Devils, Racioppi scored and had three assists as the Blue Devils romped to a 9-1 victory against Wofford. The New Jersey native also played 67 minutes in Duke’s 3-1 defeat of UCF on Sunday.

M Sonja Giraud, San Francisco – The German midfielder had a hand in three of the four Dons’ goals over the weekend, scoring the game-winning tally in Friday win over Florida Gulf Coast, while also scoring and assisting on another in a 2-1 defeat of UC Riverside.

M Kayla McKeon, Arkansas – Facing a tough road trip to Virginia, Arkansas snapped up wins against James Madison and VCU. McKeon had a lot to do with it, starting in her first college game on Friday against JMU, contributing a goal, and also scoring the winning goal as Arkansas picked up a come-from-behind 2-1 victory.

M Josee Stiever, Minnesota – Minnesota made it two wins from its first two games of the season thanks in large part to Stiever. The midfielder scored two goals and had two assists against Kansas and Utah, as the Golden Gophers made an ideal start to the season.

F Rylee Baisden, Pepperdine – It was an opening weekend scoring spree for Baisden, as the Waves won both of their first two matches. Baisden amassed three goals and chipped in two assists across the victories.

F Deyna Castellanos, Florida State – The Venezuelan youth national team star made a splash in her NCAA debut, scoring a tremendous goal in the second minute of a 1-0 win against Texas A&M. It was just one of two shots on goal the Seminoles had in the road win.

F Darian Jenkins, UCLA – Scoring the first hat trick by a UCLA player since Sydney Leroux, Jenkins paced the Bruins to a comfortable 5-0 victory in its opener against San Diego State.

F Amanda Ball, UC Santa Barbara – Another hat trick hero in California, Ball accounted for all three of UC Santa Barbara’s goals, including the decisive tally in a 3-2 win over Fresno State.