Article Written by Delete this
Comments

The college season is officially back.

But it was one team’s defensive effort that produced the first 2014 TopDrawerSoccer.com Player of the Week: Stanford center back Maddie Bauer.

The U.S. youth international played a total of 189 minutes in which the Cardinal conceded zero goals against vaunted ACC opponents Duke and North Carolina. Bauer’s play against a couple of young but spry attacks contributed significantly in a pair of wins for No. 7-ranked Stanford.

Team and Player of the Week nominations can be sent to college@topdrawersoccer.com every Monday.

Here’s the complete Team of the Week:

D Maddie Bauer, Stanford: Bauer’s effort certainly will help her case for a return to the U.S. national team fold after a snub from the U.S. U20 WNT World Cup roster, not to mention the Cardinal’s hope of besting UCLA this season. 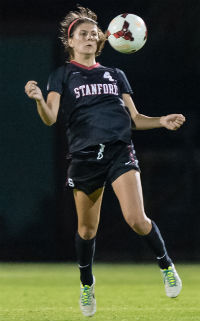 D Taylor Leach, South Carolina: Two games and two comfortable wins for the Gamecocks over East Carolina and Samford. Leach scored two tallies herself in the win over East Carolina, both from set pieces, and marshaled what looks like to be a stout defense once again.

D Kendall Romine, Stanford: Along with Bauer, Romine played every minute along the Stanford back line in the team’s two wins against Duke and North Carolina.

D Kristin Grubka, Florida State: Big things are expected from the senior standout in the wake of significant losses to the team’s defense, and she deliver a goal and an assist in a 4-1 win over Minnesota, along with a solid shift in a 1-0 stymying of Portland.

M Sam Mewis, UCLA: Call it the TDS Podcast bump, but Mewis was in fine form as UCLA laid down an early marker for the 2014 season, winning a pair of games 3-0 in dominant fashion. Mewis scored twice and assisted on another as the Bruins swept aside Maryland and UC Irvine.

M Morgan Andrews, Notre Dame: The reigning ACC Freshman of the Year showed that there will be no slip ups in her second season in college soccer, notching three assists as the Fighting Irish won both of Theresa Romagnolo’s first two games in charge.

M Emily Ogle, Penn State: The highly-rated freshman scored from the penalty spot and assisted in a 3-1 win against West Virginia, one of two starts for the Ohio native in her new collegiate home.

M Lorin Hom, California: Injuries have plagued the college career of Hom, but she is healthy and contributed a goal in each game for the Golden Bears, including the winning tally from the penalty spot in a huge 2-1 win against Santa Clara.

F Ashleigh Ellenwood, Arkansas: A huge piece to last season’s success, Ellenwood got her 2014 campaign off to a fine start, scoring the game-winning goal for the Razorbacks in a 2-1 win against Oklahoma State on Sunday. She also nabbed a pair of assists in Friday’s 3-1 defeat of Utah State.