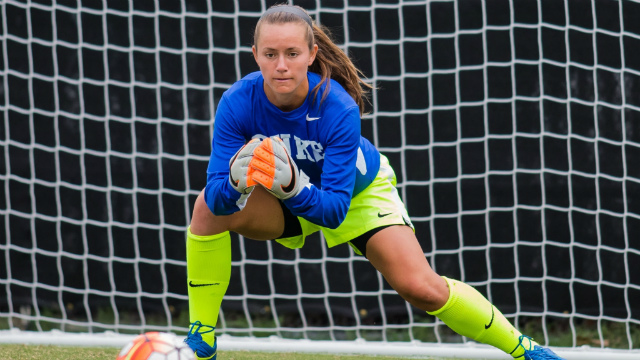 For the second week in a row, a goalkeeping reigns as the TDS Women’s Player of the Week.

EJ Proctor captures this week’s honor, after making seven stops in 110 minutes of action in a 1-1 draw against Stanford. Proctor tacked on a pair of saves in penalty kicks, as Duke will return to North Carolina for the College Cup.

See the final Women’s Team of the Week of the 2015 season below.

GK EJ Proctor, Duke – Despite getting outshot on the night 22-8, Proctor and the rest of the Duke defense did enough to force penalty kicks, where the goalkeeper made her pair of stops to secure progression to the College Cup.

D Kirsten Crowley, Florida State – Another 90 minute shift for the senior, and another stifling shutout for the Seminole back line. Crowley’s calm assurance at the back set the tone as FSU romped to a 5-0 win against Texas A&M.

D Brianne Reed, Rutgers – The stout Rutgers back line still hasn’t conceded a goal in the tournament, a stretch running to four games thanks to last Friday’s 0-0 draw with Virginia. Reed played all 110 minutes and her flip throws provided a set piece threat in the final third.

D Kaleigh Riehl, Penn State – Speaking of glittering defensive marks, the Nittany Lion back line hasn’t conceded a goal in its run to the College Cup either. Despite being a freshman, Riehl continued to excel alongside Elizabeth Ball.

M Michaela Hahn, Florida State – One of the unsung heroes of the Florida State midfield, Hahn netted the second goal of the goal for FSU as it secured a fifth straight trip to the College Cup.

M Emily Ogle, Penn State – Ogle’s first half free kick came with a bit of fortune, as WVU goalkeeper Hannah Steadman mistimed her punch. It was another tidy and quality performance from Ogle to go with the goal.

M Megan Connolly, Florida State – Connolly’s opening goal proved to be all the Seminoles would need, thanks to another suffocating defensive effort. The freshman midfielder’s star is on the rise, and the College Cup will be a perfect platform for her to shine.

F Frannie Crouse, Penn State – One of the nation’s fastest attackers, Crouse provided an insurance goal for the Nittany Lions, blasted a first half finish to the upper corner to make it 2-0 to PSU.

F Kaycie Tillman, Florida State – The freshman helped put the game out of reach, assisting on three goals as Florida State pulled away for its 5-0 victory.

F Toni Payne, Duke – If not for Payne’s early first half goal, penalty kicks never would’ve arrived for the Blue Devils, setting up Proctor for her heroics.