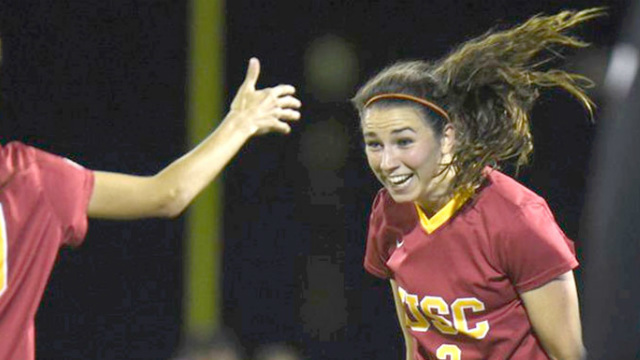 It’s that time of year again. Win, or the season is over.

With the Women’s Division I NCAA Tournament under way, the latest Team of the Week features players who stepped up and delivered for their respective teams who survived and advanced to the next round.

GK Caroline Casey, William & Mary – Casey made four saves during 110 minutes of scoreless soccer against UCF, before making a pair of saves in the ensuing penalty shootout as the Tribe survived to play another day.

D Sheaffer Skadsen, Arizona – The Wildcats avoided upset against Northern Colorado, as Skadsen scored a goal from the penalty spot in the 2-0 victory, while she also anchored a defense that limited the opposition to just three shots on target.

D Callie Taylor, Loyola Marymount – The only seeded team to lose over the weekend was California, as Taylor scored the game-winning goal in Berkley to help the WCC side advance to the second round.

D Ashlynn Harryman, Texas A&M – On a team rife with freshmen and sophomores, the junior center back helped the Aggies maintain a one goal lead in its 2-1 defeat of Washington. Harryman also provided the assist on Haley Pounds’ winning goal.

M Morgan Andrews, USC – The TDS Player of the Week helped engineer a comeback at home against a tough Cal State Fullerton side. Down 2-0, Andrews scored twice to tie the game, and when the Titans took the lead again in the second half, she scored again, as the Trojans went on to win in penalties.

M Taylor Racioppi, Duke – Looking to avoid the home upset, Racioppi setup Imani Dorsey’s goal in the seventh minute, before adding one of her own in the 26th minute as the Blue Devils cruised past James Madison 5-0.

F Tyler Lussi, Princeton – The dynamic duo of Lussi and Mimi Asom (included below as an honorable mention) helped fire the Tigers past Boston College in the first round of the tournament. After Asom scored the first two goals, Lussi added the second pair in a 4-2 win.

F Alani Johnson, Virginia Tech – Johnson nabbed a brace as the Hokies cruised past Cincinnati in Blacksburg, winning 4-0. The sophmore is now second on the team in goals scored with nine on the season.

F Katrina Guillou, UNC Wilmington – One of the few upsets of the first round, Guillou’s goal and assist helped to propel UNCW past SEC side South Carolina.