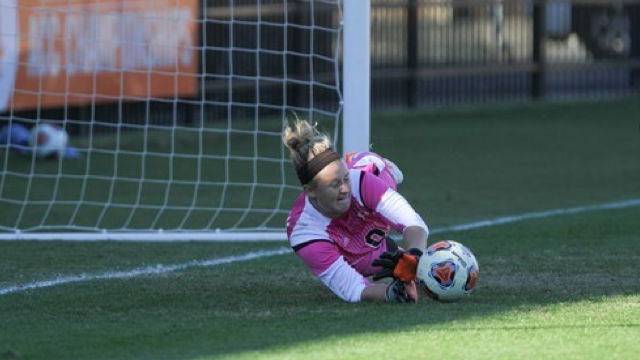 Only eight teams remain in the NCAA Tournament, with the College Cup in Cary just around the corner.

The latest TopDrawerSoccer Team of the Week features a number of standouts from last week’s second and third rounds, with all eight programs alive represented.

GK Danielle Rice, Texas A&M – The Aggie netminder made a pair of critical saves in the shootout win over Mississippi on Sunday, on the heels of a three-save performance in a 1-0 victory against North Carolina in the second round.

D Christina Gibbons, Duke – The Duke defender scored a goal and assisted on another in the second and third round matches. Gibbons also guided a back line that allowed only one goal in two wins against the potent offenses of Florida Gulf Coast and Florida, leading Duke to the quarterfinals.

D Natalia Kuikka, Florida State – It was a particularly notable performance for the outside back against Auburn on Sunday, where Kuikka’s attacking runs generated both goals for FSU. First, her cutback from the left was bundled home by Kaycie Tillman, and a few minutes later, another cross from Kuikka was diverted into the net by an Auburn defender.

D Brianne Reed, Rutgers – The senior center back played 180 minutes of soccer in shutout wins against Hofstra and Connecticut. She tacked on a goal against the Pride in the second round to keep the Scarlet Knights’ season alive.

M Alexis Shaffer, Virginia – Doing her best to shoulder the creative and scoring load left by Morgan Brian’s graduation, Shaffer’s shined all season, and last weekend was no different. She tallied what turned out to be the winning strike in Friday’s 2-0 second round defeat of UNC Wilmington, and tacked on an insurance goal in Sunday’s victory over USC.

M Jordan DiBiasi, Stanford – The freshman midfielder’s excellence continued, as she scored twice in the Cardinal’s 2-1 second round win against a tough and tenacious BYU side, including a sensational volleyed effort to open the scoring.

M Taylor Racioppi, Duke – With a goal and assist in Sunday’s third round win over Florida, Racioppi’s excellent freshman campaign continued. She’s tied for the team leading goals with seven on the season, and her six assists are most on the Blue Devils.

F Kyra Carusa, Stanford – While she’s technically not part of the newest freshman class, redshirt freshman Kyra Carusa has emerged as a key weapon for the Cardinal this season, and last week was no different. Her ability to beat defenders, get to the end line and find teammates in the box led to her creating three goals in Stanford's second and third round wins.

F Kailey Utley, West Virginia – Battling with Loyola Marymount to a 2-2 draw through the first 45 minutes, Utley ripped the game open with a second half hat trick as the Mountaineers pulled away in the third round victory.