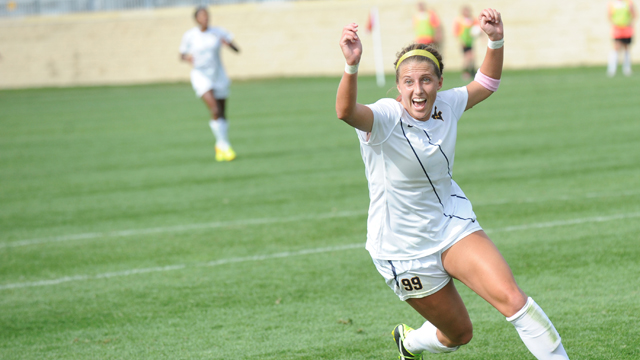 When it comes to Big 12 play, West Virginia appears unbeatable. 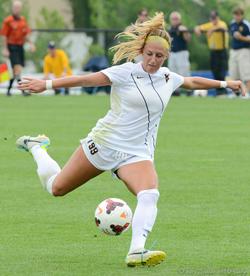 The Mountaineers have yet to lose in conference play in 2013. They extended their winning streak in the Big 12 to five (and are winners of seven straight overall) with two more wins over the weekend.

Playing a big role in those two wins was TopDrawerSoccer.com Player of the Week Kate Schwindel. The junior forward finished the weekend with two goals and two assists, scoring the game winners in both victories, a 2-0 defeat of Iowa State and a 3-2 overtime win against TCU.

Here’s a look at the complete TDS women’s Team of the Week.

GK Meghan Thomas, Duke: Needing a win on the road in a big way, Duke managed to get the job done on Sunday against Maryland, holding on for a big 2-1 win over the Terps. Thomas faced a barrage of pressure through most of the day, making nine saves to preserve what could be a tournament-saving win for the Blue Devils.

D Kelsey Hodges, North Texas: Despite playing as a sweeper, Hodges knows how to get forward and score the odd goal here and there. Over the weekend, the senior came through in the clutch, scoring twice, including the game winner again UTSA. She also played 90 minutes and got on the score sheet again in a 3-0 win over Charlotte on Sunday.

D Hanna Gardner, North Carolina: A fixture in last season’s College Cup run, Gardner has bounced in and out of the lineup at Chapel Hill this fall. However, the past two games – both wins against NC State and Boston College – the defender went the full 180 minutes as the Tar Heels picked up two shutouts.

D Amanda Frisbie, Portland: Her move to the back ahead of the 2013 campaign hasn’t eroded her scoring ability. Frisbie converted the game winning goal in Friday’s 2-0 win over Loyola Marymount from the penalty spot, and did the same in a 3-1 defeat of Pepperdine on Sunday.

D Megan Campbell, Florida State: The Ireland international registered the game-winning assist in overtime at Syracuse on Thursday when her long throw-in found the head of Dagny Brynjarsdottir for the golden goal in the 95th minute. On Sunday, long cross once again found the head of Brynjarsdottir for a goal to give the Seminoles a two-goal lead against Pitt. Campbell was also part of a stifling back line that didn’t concede a goal in two games.

MF Tori McCombs, Michigan: It was a historic day for the Wolverines, who came through with a 1-0 win in State College for the program’s first-ever win at Penn State. McCombs provided the winning strike in the 67th minute, and helped her side keep a clean sheet in the victory.

MF Maegan Kelly, Marquette: Kelly helped the Golden Eagles come through against Big East rivals Georgetown on Sunday, scoring a goal and assisting on the game winner in what ended up being a 4-0 romp over the Hoyas. The win gives Marquette the inside track on the Big East regular season title.

F Kate Schwindel, West Virginia: Her six-point outpouring over the weekend helped the Mountaineers extend their winning streak to seven games overall. Two of her goals proved to be decisive as well.

F Jordan Jackson, Nebraska: The Huskers sit alone atop the Big Ten standings after Friday’s 4-0 win over Purdue. Jackson was involved in all four goals on the day, scoring once and addings three assists as Nebraska continues to taste conference success.