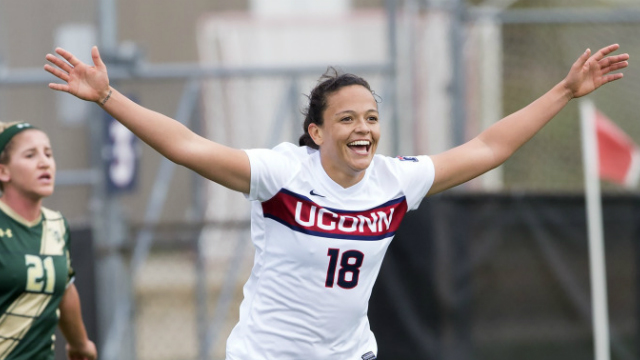 Entering the 2016 season, Rachel Hall was the main focus of opposing defenses when it came to stopping Connecticut.

Deep into the second half of the season, Hall’s senior counterpart Stephanie Ribeiro has taken advantage of the opportunities that have come her way in the final season as teams focus on Hall.

Ribeiro played a huge role in securing two massive American Athletic wins last week, as she combined for three goals and three assists as the Huskies beat South Florida and UCF at home. The offensive output secures the latest TDS Player of the Week award.

Find out who joins her on the latest Team of the Week below. Future submissions can be emailed to college@topdrawersoccer.com.

GK Diana Poulin, St. John's – The Red Storm picked up a much-needed win, defeating a high-scoring DePaul side in a 1-0 win. Poulin’s nine saves proved critical, setting the table for the victory.

D Hailie Mace, UCLA – A marauding run from her center back spot helped UCLA setup the game-winning goal in overtime in a 2-1 win over Arizona on the road.

D Amalya Johnson, Columbia – Playing the first home game of the regular season against Princeton, Columbia’s back line shined by blanking the Tigers to the tune of 2-0. Johnson played the full 90 and contributed an assist as the Lions extended their Ivy record to 4-0.

M Casie Ramsier, Auburn – In a big SEC clash, Ramsier deliver the game-winning strike as the Tigers were able to hold off a tight challenge on home turf against Arkansas.

M Katie O'Neill, Charlotte – O’Neill scored the 13th hat trick in Charlotte program history, and the first of her career, in a 4-0 victory against Louisiana Tech on Friday night.

F Stephanie Ribeiro, Connecticut – Ensured that there would be no stumble for UConn with her outburst, scoring thee times and adding a trio of assists. Ribeiro leads the Huskies with 15 goals and 11 assists.

F Jennifer Westendorf, Notre Dame – It was a match-winning performance from Westerndorf, whose bullet-tracer free kick produced the margin of victory in the Irish’s 1-0 win over North Carolina.

F Dakota Mills, Saint Joseph's – The march towards the Atlantic 10 postseason continues in earnest for the Hawks, which scored eight goals in two games. Mills found herself involved in five of those tallies, scoring three and setting up two.

F Hannah Wilkinson, Tennessee – After scoring a goal and an assist in last Thursday’s 2-2 draw against Kentucky, Wilkinson now has scored in five straight games as the Volunteers seek to keep postseason hopes alive.