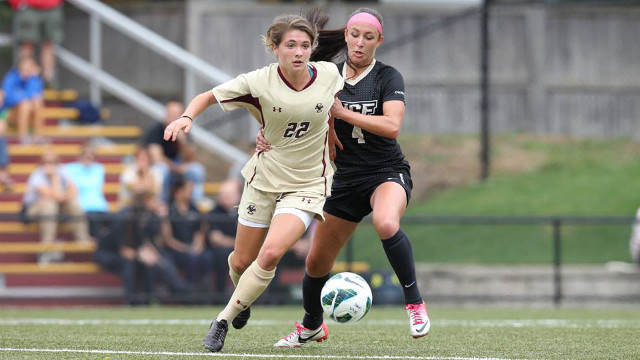 With the graduation of Kristie Mewis, Boston College faced the prospect of finding more offense this season.

Over the past week, McKenzie Meehan continued to show that she could be the answer to that question, scoring all four of the Eagles’ goals in a pair of important ACC wins.

Leading her team to those two wins earns Meehan TopDrawerSoccer.com Player of the Week honors. A prodigious goal scorer in the youth and high school ranks, she raised her goal total for this season to 11.

Here’s a look at the complete TDS women’s Team of the Week: 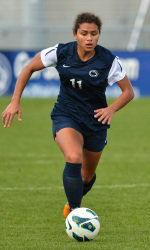 D Meghan Streight, Texas A&M: It was a heck of a week for the Aggies, who scored 11 goals over two games. Streight got two of those in an 8-0 win over Mississippi State on Thursday, and played a total of 180 minutes as they picked up two conference shutouts at home.

MF Nicholette Digiacomo, Denver: An offensive-minded midfield force, Digiacomo came through in the clutch for the Pioneers in both games – first, she scored the game winner in a 1-0 defeat of BYU last Thursday, and assisted on the opener in a 2-1 defeat of UC Santa Barbara.

MF Raquel Rodriguez Cedeno, Penn State: The attacking midfielder helped drive the Nittany Lions to lopsided wins over Purdue and Indiana. She finished the weekend with two goals and an assist, and the one helper happened to be the game winner over Purdue.

MF Ashley Campbell, Dayton: A sophomore midfielder from Canada, Campbell’s strong season continued as she scored a hat trick, leading the Flyers to a 4-0 win over Richmond on Saturday.

MF Cari Roccaro, Notre Dame: Prior to this weekend, Roccaro was deployed in the midfield. The last two games, she played up top and the Irish reaped the rewards – first Roccaro bagged a hat trick in a 5-0 defeat of Maryland on Thursday. She followed that up with a goal and two assists in a 3-0 defeat of Pittsburgh.

F McKenzie Meehan, Boston College: After scoring the game-winning goal at home in a 1-0 win over Wake Forest, Meehan led the Eagles to an important road win, scoring all three goals in a 3-2 defeat of NC State on Sunday.

F Kate Schwindel, West Virginia: Success on the road was driven by Schwindel and the rest of the Mountaineer attack, as the WVU opened its Big 12 campaign in style. The forward amassed two goals and two assists in two games, a 2-1 win over Oklahoma State and a wild 4-3 defeat of Baylor.

F Pia Rijsdijk, Alabama: With the Crimson Tide’s season not turning out as planned, the Dutch forward stepped up to help her side to a pair of important conference wins. After two goals in a win against Vanderbilt – her first two of the season – Rijsdijk also tallied in a 4-2 win over Tennessee on Sunday, prodding home what turned out to be the game winner.