It’s been a remarkable turnaround for UMBC.

The Retrievers completed a worst-to-first in America East play, securing the top spot in the conference tournament thanks to a pair of come-from-behind wins over the weekend. 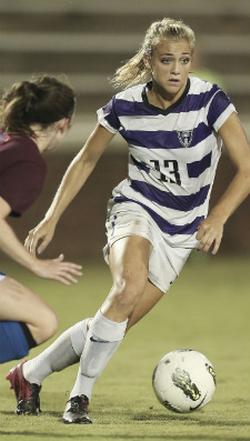 At the heart of both comebacks was midfielder Jessy Brown. The team’s second-leading scorer bagged the equalizer in a 2-1 win over Hartford, and provided the game-winning assist in a 2-1 defeat of New Hampshire on Sunday. Her role in UMBC’s comebacks earns her Player of the Week honors.

Here’s the rest of the TopDrawerSoccer.com Team of the Week.

GK Tarah Hobbs, Minnesota: The ‘keeper put in another strong performance leading to two more conference wins for the Golden Gophers. She made 10 saves in a 1-0 win against Wisconsin, and then 12 saves in a 2-1 win over Purdue.

D Karina Gutsche, Florida: The Gators have now extended their shutout streak to 559 minutes, and Gutsche was at the heart of it once again. She played all but four minutes in the two latest wins, a 3-0 defeat of Tennessee and a 2-0 win against Texas A&M.

D Christen Westphal, Florida: Along with being a part of the strong defensive effort – she played 180 minutes in the two wins for Florida – Westphal got forward and assisted on the second goal of the victory against Texas A&M.

MF Annie Steinlage, Virginia: The defensive midfielder helped marshal her team to two more victories – first, she played 60 minutes in a comfortable 4-0 defeat of Miami (FL)(w), and then delivered in the clutch, scoring the game winner in the 1-0 victory against Florida State on Sunday.

MF Morgan Andrews, Notre Dame: The freshman standout helped Notre Dame snap out of its five game winless streak, scoring a goal and dishing out two assists in a 3-1 defeat of Boston College last Thursday. She was also ever-present in the Irish midfield in Sunday’s 2-0 win over Clemson.

MF Jessy Brown, UMBC: Brown helped the Retrievers to complete a pair of come-from-behind victories in the final week of the regular season as UMBC captured a share of its first-ever regular season title. She scored the game-tying goal in Thursday night's 2-1 win versus Hartford and chipped in an assist on the game-winner that helped the Retrievers to clinch the top spot in the America East Championship on Sunday afternoon against New Hampshire.

F Carlie Couch, Furman: The first-year attacker played a pivotal role in a 2-0 week for Furman. She netted three goals and an assist in that stretch, including the game winner against Georgia Southern on Friday night, and adding two more and the assist in a defeat over Davidson.

F Tabby Tindell, Florida Gulf Coast(w): The freshmen forward lifted her side to a 4-0 win against Stetson, scoring a hat trick in the victory. Her three-goal haul also set a program record for most goals in a single season, as she now has 13 in the 2013 campaign.